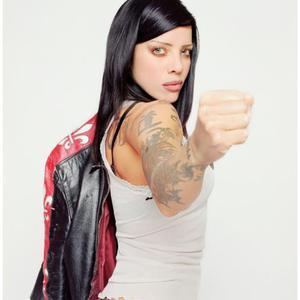 Bif Naked (born Beth Torbert on June 17, 1971) is a popular Canadian rock artist who's been active since 1994. She was born in New Delhi, India, spent most of her formative years in Harare, Zimbabwe and Tammisaari, Finland only to be adopted in late adolescence by American missionaries in Papua Nuova Guinea; they eventually settled in Winnipeg, Canada. She graduated from John Taylor Collegiate and studied theatre at the University of Winnipeg. She had a cameo in the zombie horror film The House of the Dead which was filmed near her home in Vancouver, British Columbia.

A noted poet, she has also released a spoken word album. She is heavily tattooed, getting her first when she was 16 of an Egyptian eye. Her tattoos now include a symbol of the Tao, Japanese writing, Buddhist poetry and images (such as the Bodhisattva), and Hindu imagery.

Bif has always been frank about her bisexuality, and the lyrics of her autobiographical songs detail her attractions to and relationships with both men and women. She is also a strict raw food vegan for health (as opposed to ethical or religious) reasons. She also identifies as straight edge.

TV Appearances:
Bif Naked was featured on the Buffy the Vampire Slayer soundtrack during the fourth season with their song 'Lucky'. They were actually shown on the show playing at one of UC Sunnydale's fraternity houses, with their song 'Moment of Weakness', but 'Lucky' was used as a play over. Bif also played a small role in an episode of L-Word (in season 3) as a character named "Cynthia".

She voiced the character Zoe Payne in the SSX (Snowboard Supercross) videogame series.

Awards & Recognition:
* Bif was in the top 10 sexiest women for ?TV Week?
* at Much Music she was selected "Hottest Female with Tattoos?
* CFOX Vancouver recently named Bif the hottest celebrity, saying it was a landslide win
* XFM named her the sexiest female in music after an open polling on their radio.

Another 5 Songs And A Poem (EP)