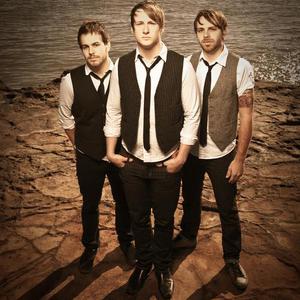 One of Alternative Press' ?100 Bands You Need to Know,? BETWEEN THE TREES has been laying the groundwork down hard since releasing their 2007 debut album THE STORY AND THE SONG. All Music Guide said of their debut: ?A strong album from a band whose story and songs are just beginning.? Touring continuously over the last two years, BETWEEN THE TREES has performed in front of thousands, with 400 live performances nationwide, and has played with such bands as Switchfoot, O.A.R., Red Jumpsuit Apparatus, Flyleaf and Mae.

The band has been invited on the Warped Tour bill for three consecutive years, and has had two sold out UK tours. With the release of SPAIN, the band is back with a killer album on Bonded Records that chronicles their growth over the last couple of years, honing in on the essence of their musical journey thus far.

The band ? Ryan Kirkland (lead singer, guitar, keyboards), and brothers Josh Butler (drums) Jeremy Butler (bass) delivers an album of hard-hitting, ambitious songs riddled with unforgettable hooks. ?We Can Try,? the first single from Spain has the makings of a can't-get-it-out ?of-your-head summer hit. Says Ryan: ??We Can Try' is a song that we love collectively as a band?it comes from the perspective that life is obviously in constant change. Everything's got to change, but you still have to strive?all you can do is try.?

And that band has done just that -- with success right out of the box. None of the witnesses to this band's rise may have believed at one time, that anyone could climb so far, so quickly; yet knowing BETWEEN THE TREES, not so unexpected. They were the first artist ?upstreamed? from a Universal independent to a Universal major, and their first CD debuted on Billboard's Heatseeker South Atlantic Chart at #3, Heatseeker National chart at #50 and Independent Album chart at #44. Their music has been placed in numerous television licensing opportunities including MTV, Live With Regis & Kelly and The Best Years on The N Network.

When asked what makes SPAIN different from their first CD, Ryan explains ?it's definitely a lot more mature. The music stands on its own. This CD is much more well-rounded in that when we were out on tour with other bands, or listened to other musical styles that blew our minds, it helped to re-shape our new material. When we began writing a couple of songs after the release of the first album, the tunes completely morphed into a different direction based on what we were listening to at the time.?

Ryan, 22, Josh, 24, and Jeremy, 22, trace back to the friendship that grew between Ryan and Josh when they were in their mid-teens. Orlando, Florida natives, Ryan had been playing guitar for about a year; and Josh announced that he was a drummer. ?So,? Ryan says, laughing, ?someone who was not a great guitarist and someone who lied about playing drums started this band.? He continues, ?Playing well wasn't what drew us to each other. We figured that we would become good in time, and didn't worry about how long it would take. Most important to us was our personal connections with each other?we knew that we'd be able to do whatever we needed to do with that foundation.? Josh's brother Jeremy soon wanted to come onboard, and although he had never played bass, Jeremy picked up the basics from Ryan. Thus, the stage was set, and in early 2005 the band began its journey.

The band's first steps were small, concentrating on local gigs in Orlando -- parties, church events and downtown clubs like The Social. As interest grew, they sharpened their chops, tightened their songs and eventually scheduled studio time with producer Pete Thornton (Shinedown, Paramore, Day of Fire), who worked with them on their first release. With The Story and the Song, the band hit the road with their extensive touring schedule, and started getting buzz from music critics. ?Playing on the Warped tour was really cool,? says Ryan. ?It's definitely a paying-your-dues- type of tour, because you have to work really hard to have anyone care. We didn't realize how significant it was until we went into a city where we'd never played by ourselves, but had on the Warped tour. Fifty people showed up singing our songs and they all had the record and wanted it signed. It was an incredible feeling.?

While on the road, they began writing songs that would be included on SPAIN.

For SPAIN, the band decided to take a leap of faith choosing their producer. Jeff Powell, otherwise known as J.P., was the mixing engineer for O.A.R. ?When we opened up for O.A.R., J.P. got really excited about our music and said that he wanted to be a part of what we were doing,? says Ryan. He continues: ?He said he had done a few producing and mixing projects but that he really hadn't worked on anything he could sink his teeth into. He knew his stuff as far as sound, and we loved hanging with him so we just decided to go ahead and cut some tracks. We made a great decision.?

Bonded Records then got involved by putting the guys in contact with Stuart Brawley who has worked with such mega-artists as Michael Jackson, Don Henley and Celine Dion, to put the final touches on the production. Says Ryan, ?Stuart took what we had and put a whole new life into it, bringing out the best in everything we recorded. We're really, really excited about our new record.?

In addition to the single ?We Can Try,? some of the band's favorites include another song ?Miss You,? ? ?a track that fell out of the sky,? says Ryan. ?I sent a line to the other guys and they loved it?an hour later, we had the whole song worked out. It's a simple tune that I wrote about my girlfriend while I was on the road just to say ?I miss you.' It's just a real fun song to play.?

?There's a prequel to the story of ?Darlin',? laughs Ryan -- another favorite tune on the album. ?I wrote two songs when I was 15 years old about a girl that I liked at the time. She heard the first song, called ?One Last Time,? and immediately thought I was head over heels for her. So I wrote the second song to tell her ? Darlin' ? listen, I don't love you?I think you're cool, but only I like you.? We never released it, so when people hear ?Darlin',? they think, ?what a nice love song'?but it's funny when you really know the story behind it.?

?Spain,? the title track was written when the band was on their first Warped Tour. ?I was on the phone with my girlfriend and we were arguing about whether or not I cared enough,? says Ryan. ?I told her ?I'll give you the world,' and she said ?I don't want the world, I just want you.' I ended up doodling around on the guitar and the inspiration just came ? ?let's make our getaway me and you babe, the rest of the world can wait.'? We named the song ?Spain? because we wanted to title it something romantic and classy, and we thought it was cool for the album as well.

With Ryan as the main songwriter, with contributions by the Butler brothers, one song on the album was written by his brother Justin titled ?Changed By You?. ?I co-produced it, but my older brother Justin wrote that song to propose to his wife,? says Ryan. ?While on her vacation with her family, he went up onstage, got a guitar and played the song for her. We added strings to the track but the words are so strong, that we wanted it to be the backbone of the song.?

With the release of SPAIN, the guys are really looking forward to hitting the road and showcasing their new material. ?We love playing live,? says Ryan. ?When we get onstage it makes it worth the grueling aspect of road travel. We love getting in front of people to pull them out of a bad day, and to inspire people. We want people to walk away from our shows feeling happy, positive; a retreat away from whatever a normal day would be for them.?

He continues, ?There are a lot of bands out there with angst, but we're all about positivity and inspiration. For me, I guess I think what we bring to the table is real down-to-earth guys just wanting to spread the message of positivity and love. Not in the hippy way, but we definitely are real genuine guys that don't say things a certain way for p.r. stunts or for the purpose of making people like us. When we come off the stage we're the same guys as on.?

BETWEEN THE TREES doesn't just talk about it, they practice what they preach. Passionately involved in a campaign called ?To Write Love On Her Arms,? their music has become the soundtrack for the organization's campaign, which is dedicated to presenting hope and finding help for those struggling with depression, addiction, self-injury and suicide.

Founded by Renee Yohe, a struggling addict who found recovery through Ryan's introduction to drug/alcohol counselor David McKenna during a seminar that McKenna moderated, mentioned Ryan as an inspiration in her book ?Purpose for the Pain,? a journal of her road to recovery. Ryan, who wrote two songs for Rene titled ?The Way She Feels? and ?A Time For Yohe,? recorded the songs with the band and included them on their first CD. The campaign has since become nationally renowned.

When asked about their most exciting part of the journey Ryan simply states, ?I get to have the coolest job in the world. I talk to people and they say all the time ?oh, I have to work today.' I don't have that feeling. The coolest part is when I can sit back and realize all the things that I've been able to do with our music. The times I get to reflect on the journey?I'd say that's the best.

The Story And The Song