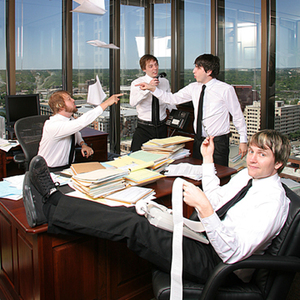 Formed in Austin, TX during the scorching summer of 2003. Hundred Year Storm's first release was in early November 2004. This self-titled quickly garnered critical praise from many well-known national indie rock websites, magazines, and radio stations. In 2006, Hundred Year Storm bought an illegal van to tour the country. They were chased by the cops till ownership of the van was settled in civil court (but they recently sold it).

Meanwhile touring in their "stolen van," Hundred Year storm released 2 LPs in 2006 "Only When It Is Dark Enough Can You See The Stars" on Northern Records and "Hello From The Children Of Planet Earth" on Floodgate Records. Both records bring a unique flavor to the indie/experimental world blending shoegaze, pop, and 90's rock with long instrumental tracks featuring historical voice samples.

After clocking in over 400 career shows from 2004-2007, Hundred Year Storm has played in over 40 states with bands such as Copeland, Brandtson, Mae, Knockout Kings (band), Stellamaris (The New Frontiers), Gasoline Heart, The Panic Division, Project 86, Kids In The Way, This Will Destroy You, By The End Of Tonight, Relient K, Acceptance, I Love You But I've Chosen Darkness, Umbrellas, Ethan Durelle, Pompeii, The Snake The Cross The Crown, Sleeping At Last, and more.

The Future Belongs To The Brave