beats the hell out of me 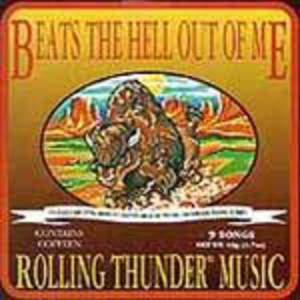 beats the hell out of me (bthoom) was formed in late 1988. Spawned from the mentorship of Grant Wolf's Jazz Program at MCC, Tom Coffeen (g), Aaron Stewart (b), Chris Bailey (g) and Erik Rogan (d) merged to form the rhythm section of group that defied definition, and was considered by many (us) to be light years forward of a musical category. A combination of different musical backgrounds graciously complimented and explored musical boundaries.

Mike Pistrui (v) was also discovered at MCC - hanging ?vocalist seeking band? flyers in the music building. Mike WAS a vocalist that had to be ?seen? to be ?heard?. A super-human antenna hyper-sensitive to his tonal ecosystem, Pistrui would lose himself in music like a method actor gone freak. Early recordings could only capture one dimension of Mike; his idiom was the stage. Pistrui, the epitome of a music lover, would give his heart, soul, blood, sweat and tears at every performance. Mike's delivery was brutally honest and explored the parameters of emotional expression. Many fans saw this as a refreshing alternative to the image based, lifeless vocalist of the day.

On stage the band couldn't be denied, whether you liked them or not. They combined the aggressiveness of Hardcore with the power of Metal, the dynamics and sensitivity of Jazz with the intricacies and brashness of Fusion and Avant-garde respectively. Odd time signatures were the norm and songs were NEVER played the same way twice. This was due to the fact that beats the hell out of me never practiced completed songs. Thus, the band members could utilize spontaneity, improvise and perform tunes with an eager desire to sonically and rhythmically push songs to their limits; A technique fairly new to the "alternative rock" scene.

beats the hell out of me was a %100 DIY band until 1993, playing several self booked (Coffeen) tours that placed them in most College Towns USA. They were also the second local band to ever release a CD in AZ (August Red 1991) which was done on their own co-founded label. BTHOOM also unwittingly captured the recognition as the SUN CLUB (Debbie Mcdevit era) house band where most of the members worked for years. The band probably prolonged the clubs life for at least a year by donating their funds from shows to pay bills and fines that the club had acquired over the years.

In 1993 Larry Mac introduced the beats the hell out of me sound to Metal Blade Records CEO Brain Slagel, who promptly signed them as the first artist to their new Metal Blade Modern roster. However, the early nineties was a volatile period to be a band that defied definition. So much emphasis was placed on defining music rather then listening. Terms like: ?grunge?, ?metal?, ?punk? often killed a band before it could be exposed - Especially a band like BTHOOM that did not have a ?rock'n'roll? image to encapsulate and enforce a musical description. However, BTHOOM was proud and adamant that they didn't dawn attire or a trendy haircut to compliment their musical security. Their music was brutally honest and time was spent honing their craft rather then stage appearance.

beats the hell out of me completed two albums for Metal Blade, the second of which, Rolling Thunder Music was produced by Ross Robinson. Thanks to Brad Singer, who supplied the deficit funds required to construct this endeavor, Beats got a once in a lifetime chance to record with a top producer at a top recording studio; Richard Kaplan's Indigo Ranch Studio.

The future seemed bright for beats the hell out of me? Recent completion of Rolling Thunder Music, a good industry buzz and unexpected praise from music critics. Although BTHOOM was playing sold out shows 1000+ in AZ - Booking agent woes, lack of management, NO TOUR SUPPORT from their label and financial realities finally set in compromising Beats to call for a sabbatical in 1996.

Many years and many musical projects later, beats the hell out of me is back. Stimulated by a memorial concert for Julie Hurm/Tessitore, BTHOOM has returned and is currently working on a new album being recorded and produced by the band's own Chris Bailey.

Keep your eye out for the Beats the hell out of me BOX SET, which will contain: the Black and White Album (self released in 1992); the Blue Album (first Metal Blade release 1994); Rolling Thunder Music (2nd Metal Blade release 1995); the BTHOOM LIVE album; and for the first time available on CD the "?" Cassette (self released in 1991); on along with the latest CD titled ?REVISING HISTORY?.
Projected release date for this box set is Fall of 2004.