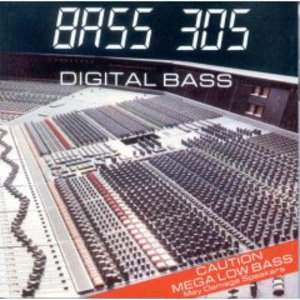 The production duo known as BASS 305 consists of brothers Mark and David Watson. Bass 305 was formed in June of 1992 after the Watson Brothers left Atlantic Records where they produced and wrote freestyle projects for the label. The duo started recording modern instrumental music in the same vein as early Tangerine Dream and Kraftwerk . "We started adding an extreme low moving bass part to the compositions", states Mark. "We also changed the melody and counter melodies every eight bars.

What was created was a very highly sophisticated type of electronic music with a 'Miami Bass' low end which made our compositions different from any other Instrumental Techno Bass songs of the day. The music sounded like the electronic, avant- garde experimental music that I did at the University of South Florida, where John Cage was briefly a professeor."

Digital Bass was the first project and album released by BASS 305. David and Mark recorded the album at their studio in 1992. The studio was a converted bedroom in a condominium located in Oakland Park, Florida. "I used every trick in the book to make that album sound great!" states Mark, who credits Eddy Offord, long-time Yes producer,as the person who taught him about engineering and producing records. "We used a 12 Bit EMU sampler, Roland R-8 Drum Unit with an 808 card, a DX7, plus several early EMU Brains. We mixed on an AKIA 12 Track Console/Tape machine with an additional 16 channel rack mounted Hill mixer. For effects we had a Yamaha SPX 90 and an Alesis Quad Reverb. All midi sequencing for the album was done on a Yamaha QX1. For the mega low 808 bass, we implemented a 32 Band Rane Graphic EQ to boost the extreme sub-frequencies and compressed the bass notes through an old Yamaha compressor. These devices were sound reinforcement equipment, not studio gear. The sampled dialog parts found on the first two albums were found at the public library on old instructional vinyl records." The final mixes were recorded on a Panasonic SV3500 DAT machine. Digital Bass was originally mastered by George Garcia at Miami Tape located in Hialeah, Florida.

The second album, Bass-The Future, was recorded at the DM Studios in Sunrise, Florida. This album was recorded in 1993. The same equipment from Digital Bass was used with the addition of a 32 channel Tascam M3500 console and a "Black Face" 8 track Alesis ADAT machine.