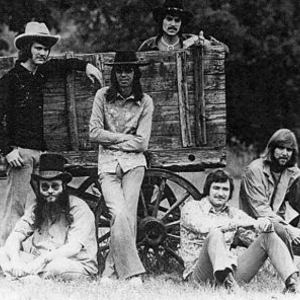 Moss, Buttrey and Gayden (who wrote the number one UK hit by The Love Affair, Everlasting Love) had all been in the Grammy award winning Nashville supergroup Area Code 615. They originally played together on many of Monkee Michael Nesmith's Nashville sessions. They enjoyed the experience so decided to form Area Code 615.

This line up of Barefoot Jerry recorded the superb Southern Delight before Gayden left in 1972 to form his own band - Skyboat; Buttrey joined Neil Young's band. Wayne Moss and John Harris were soon joined by Russ Hicks - guitar/steel guitar/horn/vocals and Kenny Malone - drums for the equally breathtaking "Barefoot Jerry" released on Warner Brothers in 1972. This line up later expanded to include: Buddy Skipper-keyboards, Fred Newell - banjo/harmonica/vocals ,Dave Doran - guitar/bass/vocals, Si Edwards ? percussion, and (Area Code's) Bobby Thompson - bass/guitar/vocals for the last of their "classic albums" and their first for Monument "Watchin' TV" in 1974.

The line up of Moss, Hicks, Doran, Edwards, Skipper and Newell from this period are captured live on the recently released "Barefoot Jerry Live" CD. Wayne Moss became the last original member of the band. Retaining Russ Hicks and Si Edwards, they added Terry Dearmore - vocals, guitar/bass, Jim Colvard - guitar/bass and Warren Hartman ? keyboards. In 1975 they recorded "You Can't Get Off With Your Shoes On". Colvard took his own life in 1976.

With the departure of Warren Hartman, guitarist Barry Chance and Steve Davis -keyboards/guitar/vocals, joined the band for what is considered their weakest album "Keys to the Country" in 1976. Davis and Dearmore departed and longtime barefoot alumni and Area Code 615 legend Charlie McCoy - keyboards/harmonica/flutes/jew's harp and Mike McBride - bass/guitar/percussion/mandolin, joined for a return to form, "Barefootin'" in 1977. In 1977 the band finally ceased recording under that name, leaving behind a legendary Country Rock body of music.

Barefoot Jerry was influential in Southern and Country rock. They are mentioned in Charlie Daniel's (Charlie Daniels Band) tune "The South is Gonna Do It Again." As "all the good people in Tennessee are diggin' Barefoot Jerry and CDB". This band has backed up CDB, Bob Dylan, and The Band as well as many other acts

You Can't Get Off With Your Shoes On