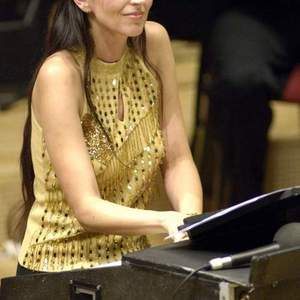 Barbara Dennerlein (born 25 September 1964 in Munich, Germany), jazz musician, caused a revival of the Hammond organ's popularity with her distinctive art of playing. At age 11 and much to her surprise, Barbara received a simple electronic organ for Christmas. Soon after her first organ lesson she asked her parents for a bigger instrument with two manuals and pedals so she could learn organ playing properly.

At age 11 and much to her surprise, Barbara received a simple electronic organ for Christmas. Soon after her first organ lesson she asked her parents for a bigger instrument with two manuals and pedals so she could learn organ playing properly. After one and a half years of lessons she decided to continue her learning process autodidactic and to develop her own, not to be imitated style. Public appearances were to follow soon and, during school vacation at only age 15, she was invited to play a professional concert date in a jazz club.

Barbara Dennerlein, a band leader from the very beginning and often being the youngest among elder, is realizing her musical visions solo or in cooperating with well experienced musicians.

Dennerlein's local reputation as "Organ tornado from Munich" was soon wide spread after her first TV appearances in 1982. When her third LP "Bebab" was issued, Barbara established her own record label in 1985. Having received the German jazz critics award, her popularity increased tremendously in Europe and grew during the nineties into a world wide reputation, followed by three recordings on ENJA and three on the international jazz label VERVE. On these recordings she worked a. o. with Ray Anderson, Randy Brecker, Dennis Chambers, Roy Hargrove, Mitch Watkins, and Jeff 'Tain' Watts.

Dennerlein's performances on the Hammond organ include solo performances as well as up to quintet formations with her "Bebab" band. With MIDI interfaces, built into pedals and manuals of her Hammond B-3 organ she adds synthesizers and samplers to her sound. With her bass pedal playing she replaces the rather weak Hammond pedal sound. After a variety of projects and after playing with renown unconventional musicians, such as Friedrich Gulda, Barbara Dennerlein started playing the pipe organ in 1994, finally recording a jazz album on church organ in 2002. Since 2003 she also develops jazz projects in cooperation with symphonic orchestras.

Barbara Dennerlein has been composing since the beginning of her career. Her first album already included four own titles. Her compositions vary from traditional blues schemes, romantic, melancholic ballads to tempo driven compositions with elements of swing, bebop, funk and Latin rhythms. The fast rhythm, often characterizing her interpretations of well known standards, require artistic pedal foot work in many of her own compositions. Dennerlein often uses changing bars, as well as unconventional harmonic changes to confer narrative and figurative expression to her compositions.

In a Silent Mood

The Best Of Barbara Dennerlein