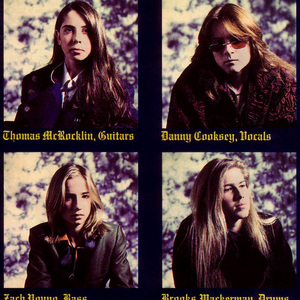 Aggressive, polished, straightforward hard rock played by an accomplished group of teenagers. They were formed by Danny Cooksey (vocals), Thomas McRocklin (guitar), Zack Young (bass) and Brooks Wackerman (drums). Sixteen-year-old Cooksey was a child actor whom appeared in such shows as Diff'rent Strokes and the movie Terminator 2, his gruff whiskey soaked vocal delivery was unexpected from such a young vocalist.

McRocklin, at the tender age of eleven, appeared in Steve Vai's "The Audience Is Listening" video, as well as opening for Ozzy Osbourne in concert. Young was the Bass Institute of Technology's youngest graduate at forteen, while fifteen-year-old Wackerman had won regional rock and jazz awards, plus had a Remo endorsement.
Steve Vai became the band's mentor, as he produced and co-wrote much of the debut album. It was a polished yet hard rocking affair that included a great cover of Thin Lizzy's "Nineteen". However the album failed to sell, and after the accompanying tour was complete McRocklin departed to form Virgin Sun. The remainder of the band remained together briefly as Lucy's Milk, before deciding to break apart.
Following the break-up, Cooksey returned to acting, Wackerman joined both Bad Religion and Suicidal Tendencies, Young formed a rocktronic band called Artificial Intelligence and McRocklin started working in a music store.