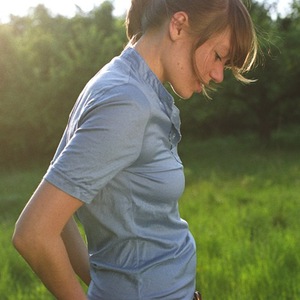 If one squints into the sunset, contours get blurred. Things come to an end and begin in a different manner. Fugitive points of light play their game with the retina. If one squints into the sunset, one doesn't see clearly. And still one sees good. Sundet knows a lot of sunsets, though. Julia Guther and Berend Intelmann have watched them, into the Havel and the Baltic Sea, on Swedens southern coast where first the ideas and in the following summer the recordings for Sundet were brought together.

Sundet knows a lot of sunsets, though. Julia Guther and Berend Intelmann have watched them, into the Havel and the Baltic Sea, on Swedens southern coast where first the ideas and in the following summer the recordings for Sundet were brought together. Patrick Arp and Katie Zahn have helped with that, the first by means of the guitar,the latter by means of the flute. Norman Nitzsche has mixed the record together with Berend Intelmann.

This second album by Guther has been created between the places, or to say it more precisely: in different places. In the Swedish summer house, in a former broadcast studio in Berlin-K?penick and in a living room in Hamburg with a view to the garden. Thats maybe why the title Sundet fits as well. The sound between the coast and a close island, the space between two places, between here and there. Within the sound, waters are calm, waves are flat. Sometimes however, in rough November nights, the sound is a bleak place, too. And sometimes the single soundtracks form a scummy crest. Guitars and even more guitars,
sinking voices, a powerful drum set, the HiHat wide open. Murmuring noise.

Before and hereafter Sundet is a more light-footed, a slightly melancholic companion. Guther play pop music, British pop music in some respect. Every now and then fragile, in a state of suspense, run through by small and big melodies. At the beginning Still in this town: an airy, breathing track. A little later there is Many frames per moment consisting of handclaps, hook-lines, a fine tension until its final euphoria. At last there is Two minds in between: warm, waiting, a soft, precise tact, a soft, present voice.

If one squints into the sunset, the contours get blurred. Julia Guthers voice emerges from sound-spirals. Flutes, electronic bits and pieces, a harmonica, appearing and staying even if they have already disappeared. Bass lines and guitar pickings interweave in a friendly way. All that is there appears only together.

I Know You Know