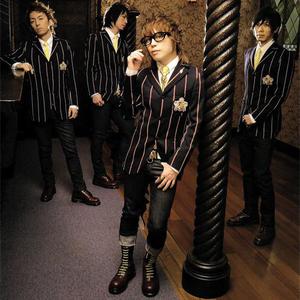 Abingdon Boys School (A.B.S.) is a Japanese rock band formed in 2005. The members are Nishikawa Takanori (T.M.Revolution) on vocals, SUNAO on guitar, Shibasaki Hiroshi on electric guitar and Kishi Toshiyuki on keyboards. SUNAO and Shibasaki are also involved in T.M.Revolution's backup band. Toshiyuki had arranged several songs on T.M.Revolution's 2006 album "UNDER:COVER". Nishikawa is well recognized among the Japanese media as a singer and producer.

Nishikawa is well recognized among the Japanese media as a singer and producer.

Toshiyuki Kishi is a recognized programmer and keyboardist. He has worked with YMO (Yellow Magic Orchestra), one of the most popular electronic groups in Japan, and Gospellers. He has also written themes for TV Tokyo shows.

Shibasaki Hiroshi made his major debut in 1991 as the guitarist of the popular band WANDS.

The band debuted on December 6, 2006, with their first official single "INNOCENT SORROW", the opening theme to the anime D.Gray-man. It placed #4 on the Oricon charts.

Before the release of INNOCENT SORROW they recorded two other songs: "stay away" and "dress" (a cover of a song by BUCK-TICK), which were featured on the tribute albums "LOVE FOR NANA ~Only 1 Tribute~" (for the movie adaption of the manga "NANA") and "PARADE ~RESPECTIVE TRACKS OF BUCK-TICK~" (an album with covers of songs by the popular J-rock band BUCK-TICK).

On May 16, 2007 the band's second single "HOWLING" was released, which was also featured as the opening theme to the anime Darker than BLACK. It ranked #4 on the Oricon charts. Shortly after the release of "HOWLING", their third single "Nephilim" was released on July 4, 2007. The song was featured as the theme song to the PlayStation 3 game FolksSoul.

abingdon boys school's first full studio album was released on October 17, 2007. Their 4th single, "BLADE CHORD", was also released on December 5th, 2007 and was used as the theme song to Sengoku Basara: Heroes. After this they also recorded a song for the LUNA SEA: Memorial Cover album, a full album of LUNA SEA covers dedicated to the defunct rock band.