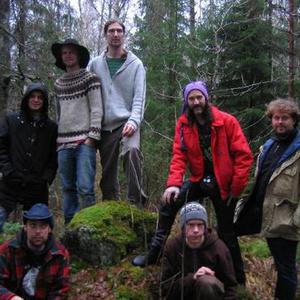 The ?resund Space Collective (OSC) had their first jamsession in April 2004, encouraged by longtime spacerock-fanatic Scott Heller; aka Dr. Space. The collective is a group of Danish, Swedish and American musicians that get together as often as possible for free form improvised cosmic music. The flavour of the music is different with each session. The stretched out jams can often combine complex interplay between guitar and synthesizer as well intense drumming and bass playing.

The stretched out jams can often combine complex interplay between guitar and synthesizer as well intense drumming and bass playing. Sometimes chaotic, sometimes melodic but most of the time funky and cosmic! We enter into the genre of funk, jazz, reggae, kraut, stoner, folk, world, electronica and space rock ( and probably some others) as we improvise our way along. The jam sessions alternate between Malm? and K?benhavn across the ?resund bridge, which connects Denmark & Sweden! The core of the collective features current and former members of the Danish bands Mantric Muse and Gas Giant as well as the Swedish band Bland Bladen. Quite often other musicians join as well from other Swedish bands like the Carpet Knights, Drahk Von Trip and Sgt. Sunshine.

Mantric Muse is an instrumental progressive psychedelic cosmic-rock band, who has recorded an CD-EP entitled, Picks in Space and are about to finish their first full length CD. The band has played rare concerts in and around K?benhavn for the last 6 years.

Gas Giant are an internationally known heavy psychedelic stoner rock band, who have toured all over Europe and have released several albums, with the latest called Mana.

Bland Bladen, are a progressive instrumental space folkrock band based in Malm?, Sweden. The band released a debut CD-R in 2004on their own and has played mainly in Sweden but also in K?benhavn (with Mantric Muse & Hidria Spacefolk) & Helsinki (Psychotropic Zone).

OSC records all of the jam sessions and makes these available to fans via the web site in MP3 format. We currently have over 35 hours of material on the web site for free download. We have also released 12 limited edition CD's with the best of the jam sessions. . Our first studio-CD came out in Jan 2006 on Transubstans Records in Malm?, Sweden. The second CD "It's all about Delay" came out in October 2006, and is a double-CD with amazing artwork from Ed Unitsky. We have just released our third studio-journey called "The Black Tomato"! Our 4th studio CD was released in August 2008 on Sulatron Records in Germany. The bands 5th CD was released in Feb 2009 on Transubstans Records and is called Good Planets are hard to Find. If you want to support this kamikaze-project, please visit Transubstans Records and the website of OSC!

But also joined by:

Øsc Meets Bmc - Freak Out In The Fjord

Give Your Brain A Rest From The Matrix

Entering Into The Space Country