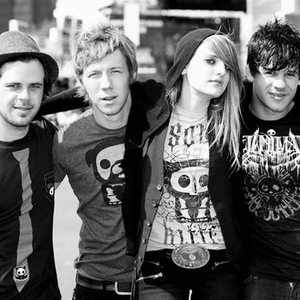 Automatic Loveletter is a rock band, with acoustic influences, based in the United States of America. The band formed in Tampa, Florida, in 2007, led by vocalist and guitarist Juliet Simms, her older brother and lead guitarist Tommy Simms, drummer Ryan Metcalf, and bassist Clint Fowler. Playing both the main Bamboozle and Bamboozle Left in 2008 and the 2008 Vans Warped Tour, with 10 Million Listens on Myspace and over 300 live shows, Automatic Loveletter has earned their upcoming debut release .

Playing both the main Bamboozle and Bamboozle Left in 2008 and the 2008 Vans Warped Tour, with 10 Million Listens on Myspace and over 300 live shows, Automatic Loveletter has earned their upcoming debut release . "Paramore is the female-fronted draw of the day here at Bamboozle Left, but Automatic Loveletter's Juliet Simms more than held her own on the Nokia Ticket Rush stage. Clad in an obligatory black hoodie and strumming an acoustic guitar, she wailed her way through a frenetic half-hour set split by a solo acoustic ballad. Get this band on a main stage and she'll be receiving automatic love letters by the truckload." LA Times

Automatic Loveletter was formed with Juliet Simms on guitar and lead vocals, Daniel Currier on drums and brother Tommy Simms playing bass and producing, with bassist Sean Noll sitting in on occasion in Tommy's home studio in the Tampa Bay area. The band was first called Stars and Scars and recorded its first rock song together in December 2005, naming the song after the band but written by lead singer Juliet Simms. They also recorded "Tin Lizzy", written by Tommy.

Juliet also finally acoustically laid down all of the songs she had been writing over the last three years for consideration for her first major label album. Signed by Allison Hagendorf now host of Fuse TVs "The Pop Show", then working at Epic Records, Juliet went on to form Automatic Loveletter while Epic struggled with the 2005 Payola Scandal and internal problems finally dropping over 70 bands in 2007. With Allison as Juliet's champion, Automatic Loveletter was not dropped but was also not supported for the next year and 1/2 touring in the drummer's Ford Excursion and making feather hair clips and burning their own copies of their Epic Produced CD with hand painted slip covers to help fund their tours.

Automatic Loveletter did record their album in 2007 with producer Matt Squire (Panic at the Disco, Boys Like Girls, All Time Low, Cute is What We Aim For, The Cab, The Maine). "He challenged me and I challenged him," Simms said. "I felt very comfortable and that's when the best of me comes out. The entire time was playful and fun and that's what rock n roll's about to me -- having a good time." Simms took her massive songbook to Squire and narrowed down the right tunes and crafted them to fit together, sometimes taking songs in entirely new directions. "The Answer," for instance, was originally a ballad, but became one of the more upbeat numbers on the album. Daniel Currier and lead guitarist Joe Nelson both played on the album, Sean Noll officially joining just before some of their first tours together and big brother Tommy occasionally touring with the band to play lead, or rhythm guitar in larger venues and outdoor concerts filling up the sound and the stage.

But the Squire Album was never fully released, however tracks like "The Answer", "Parker", "August 28Th 3:30 A.M.", "Hush" and "Make-up Smeared Eyes (Acoustic)" were all released on an EP Recover' and sold through Hot Topic and on-line distribution.

Up to and while touring with 2008 Vans Warped Tour, Automatic Loveletter held #1 or #2 position on the Myspace Music Emo chart for 6 months, hitting 10 Million Listens, hit #2 on Smart Punk for three weeks and Artisan News Reported them as The Next Big Thing. But after the tour when Epic was scheduled to release the album Automatic Loveletter (acronym A.LL.) were told to continue touring and asked by then President Charlie Walk to write more upbeat music. Instead, Juliet submitted a fan favorite "Black Ink Revenge" which was rejected several times for re-write until it became "My Goodbye" one of the tracks off the upcoming Sony release. "I had been signed to Epic for going on three years, toured in cars with my completely broke band and was feeling like I disappointed my fans who had been promised music for over a year so I sat in my room for four days re-writing and re-submitting that song like 5xs. I like "My Goodbye" a LOT but it was the result of a lot of pressure and the desire to get an album released." "My Goodbye", "The Day that Saved Us" and "Hush (New Version)" were quickly released as another self titled EP just before the final chapter with Epic Records when they fired all the members except Currier before the first headlining tour, held auditions for new members, hired Jacob Fatoroochi, James Bowen and Wayne Miller then half way through the tour called Juliet and told her that all of the pay for the band she was on tour with was being withdrawn and the band was dropped. A.LL.went on to sell out venues like the Knitting Factory in LA and San Francisco.."It was very liberating. After crying my eyes out for a couple hours I had some of my best shows ever on that tour."

Almost immediately the band was picked up by RCA and Juliet asked to write for a new album produced by Josh Abraham (Weezer, 30 Seconds to Mars, Velvet Revolver). Automatic Loveletter's first full length album, "Truth or Dare", was released on June 22nd just before heading out on Vans Warped Tour 2010. In the summer of 2011, Juliet released an acoustic Automatic Loveletter EP titled, "The Kids Will Take Their Monsters On", on Paper + Plastick Records. Again, touring on Vans Warped Tour 2011 and promoting the new acoustic album.

In the winter of 2011, Juliet was asked to audition for the second season of NBC's, "The Voice". Juliet's audition wowed the judges and she chose become a member of Team Cee-lo. Juliet decisively won her Battle Round and will be performing live on April 9th for Team Cee-lo's first Live Round.

Simms' voice can be heard on records from LoveHateHero's "Theatre of Robots", Secondhand Serenade's "Fix You" / "Hear Me Now", All Time Low's "Remembering Sunday", and Cartel's "Lose It".

The Kids Will Take Their Monsters On