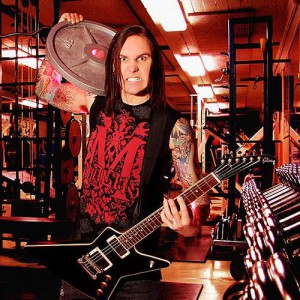 Austrian Death Machine is a side project from San Diego, California. ADM is founded by As I Lay Dying vocalist Tim Lambesis as a parody band and as a tribute to the movies of actor and former California governor Arnold Schwarzenegger. Lambesis writes and records all the music playing guitar, bass, and drums as well as the majority of the vocals, leaving Destroy The Runner vocalist Chad Ackerman (portraying "Ahhhnold") to perform Schwarzenegger like vocals.

The only thing Lambesis or Ackerman do not record are the guitar solos in every song which are performed by various guitarists from other bands. Lambesis stated where As I Lay Dying "is heartfelt and full of passion" Austrian Death Machine on the other hand "is an outlet of pure testosterone and stupidity."

Austrian Death Machine released their first album "Total Brutal" on July 22, 2008. A few months later they released a Christmas theme EP titled "A Very Brutal Christmas". After some tour support of "Total Brutal, Lambesis went back on tour with As I Lay Dying. While on tour he posted on Austrian Death Machine's MySpace blog that he had ideas to follow up "Total Brutal" with a double disc effort titled "Double Brutal" stating that the first disc would be original songs where the second disc would be comprised of cover songs. After returning home from tour in early Summer 2009, he went straight to work on "Double Brutal" which was released September 29, 2009.

Austrian Death Machine's third album, "Keep It Brutal" is in the works.