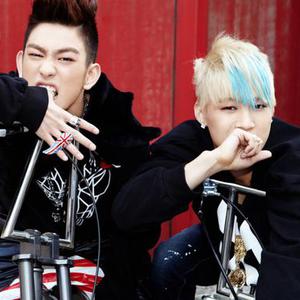 JJ Project (???? ????) is a South Korean duo signed under JYP Entertainment that debuted in 2012. The duo consists of JB(???) and Jr.(???-?) and released their first album "Bounce" on May 20, 2012. On 2009, JB and Jr. individually auditioned for JYP Entertainment. With their exceptional dance skills and good looks, they tied the 5th Open auditions as the overall winner and later become a trainee under JYP Entertainment. In 2011, both of them landed a role on then sequel of 2011's hit drama Dream High.

On May 8, JYP Entertainment launched a new website for the ?JJ Project? along with an official Facebook Page and YouTube Channel. A teaser video called "JJ Project Slot Machine" was also released. Although there's no official statement made, many people assume that JJ could stand for JB and Jr. It was later revealed that JJ Project is indeed composed of JB and Jr.

On May 9, another video teaser entitled "JYP 007" was uploaded thru JJ Project's offical Youtube account. It shows J.Y. Park as he opened the briefcase that he had placed on the table revealing an envelope titled "JYP New Project'. JYP then opened the envelope revealing a iPad, showing a new project group that JYP was working on.

On May 13, JYP Entertainment releases another teaser video entitled "Time 2 JJ". The teaser didn't show faces of any of the members from the duo but showed the duo's wardrobe choices. All the teasers ends with the date May 20, 2012.

On May 14, the album cover and full track listing of their debut album "Bounce" was revealed. Teaser photos for JJ Project was revealed on May 15 through JYP Entertainment's official twitter account.

On May 17, 2012, JJ released Bounce's teaser and on May 20, the official music video for title track "Bounce" was released through their official YouTube account.