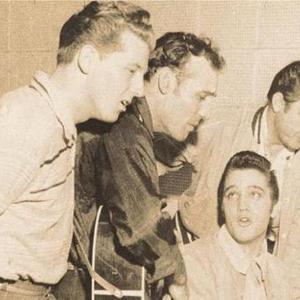 The Million Dollar Quartet consisted of Johnny Cash, Jerry Lee Lewis, Carl Perkins and Elvis Presley, who met by chance at sam Phillips's Sun studio one afternoon and jammed together. The jam session seems to have happened by pure chance. Perkins, who by this time had already met success with "Blue Suede Shoes", had come into the studios that day, accompanied by his brothers Clayton and Jay and by drummer W.S.

The jam session seems to have happened by pure chance. Perkins, who by this time had already met success with "Blue Suede Shoes", had come into the studios that day, accompanied by his brothers Clayton and Jay and by drummer W.S. Holland, their aim being to cut some new material, including a revamped version of an old blues song, "Matchbox". Sam Phillips, the owner of Sun Records, who wished to try to fatten this sparse rockabilly instrumentation, had brought in his latest acquisition, singer and piano man extraordinaire, Jerry Lee Lewis, still unknown outside Memphis, to play the piano on the Perkins session.

Sometime in the early afternoon, Elvis Presley, a former SUN artist himself, but now at RCA, dropped in to pay a casual visit accompanied by a girlfriend, Marilyn Evans. He was, at the time, the biggest name in show business, having hit the top of the singles charts five times, and topping the album charts twice in the preceding 12 month period. Less than four months earlier, he had appeared on the Ed Sullivan Show, pulling an unheard-of 83% of the television audience, which was estimated at 55 million, the largest in history, up to that time. After chatting with Philips in the control room, Presley listened to the playback of the Perkins' session, which he pronounced to be good. Then he went into the studio and some time later the jam session began. Phillips left the tapes running in order to "capture the moment" as a souvenir and for posterity. At some point during the session, SUN artist Johnny Cash, who had also enjoyed a few hits on the country charts, popped in.

As the session continued, Phillips spotted an opportunity for some publicity and called a local newspaper, the Memphis Press-Scimitar. Bob Johnson, the newspaper's entertainment editor came over to the studios accompanied by a UPI representative named Leo Soroca, and a photographer.

The following day, an article, written by Johnson about the session, was published in the Memphis Press-Scimitar under the title, "Million Dollar Quartet". The article contained the now well known photograph of Elvis Presley seated at the piano surrounded by Jerry Lee Lewis, Carl Perkins and Johnny Cash.