Future Of The Left 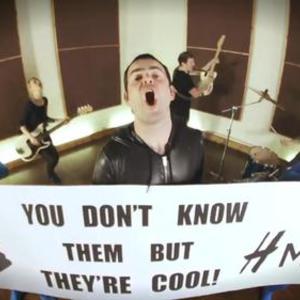 They formed following the break-up of two Cardiff bands: ex-mclusky members Falkous and Egglestone joined forces with former Jarcrew vocalist Kelson Mathias and bassist Hywel Evans. Evans soon left to start his own group so Mathias took up the bass, and after initial gigs under a variety of tongue-in-cheek pseudonyms the remaining trio debuted as Future Of The Left in September 2006.

Remaining with mclusky's label Too Pure, Future of the Left made their first release with the double A-side Fingers Become Thumbs / The Lord Hates a Coward in January 2007. After two more singles the album Curses was released in September 2007. Falco's abrasive guitar riffs and vocals remained to the fore, but keyboards were now added to the sonic arsenal: chiefly a fuzzed-up Roland synth but also acoustic piano on album closer The Contrarian.

Amidst constant touring, a stopgap live album last night i saved her from vampires was released in 2008. March 2009 saw a new single on 4AD, The Hope That House Built, followed by their second studio album Travels With Myself And Another in June 2009.

In May 2010 Mathias announced his departure on the band's Myspace blog. Steven Hodson of Oceansize and Kong filled in on bass for the following tour, which also saw the addition of Jimmy Watkins of Strange News from Another Star on guitar. In October 2010 new bassist Julia Ruzicka (formerly of Million Dead) was introduced, and more tour dates in Europe and Australia announced.

Their latest releases are a 6-track EP, Polymers Are Forever (November 2011), single Sheena Is a T-shirt Salesman, and album The Plot Against Common Sense released in June 2012, supported by UK and European touring.

To Failed States And Forest Clearings

The Peace And Truce Of Future Of The Left

Love Songs For Our Husbands (EP)

How To Stop Your Brain In An Accident

The Plot Against Common Sense

Travels With Myself And Another

Last Night I Saved Her From Vampires