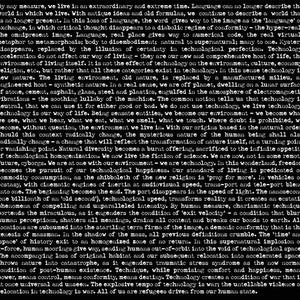 Other than the music they release every so often, not much is known about Teargas & Plateglass. In many ways, what's not known about the band says more about them than what is. We don't know who they are or where they come from or where they reside. But we know they are fond of the works of Godfrey Reggio and Sebastaio Salgado, David Sylvian, Jennifer Charles, and David Hykes. We know the last interview the band did was five years ago. We know their last album, Black Triage, concentrated on themes about genocide.

What others have said about the band, from time to time, has helped fill in some of the details. The American Film Institute, which exhibited their music videos, called them ?a bold experimental vision." URB says the band ?pave the way so the dark side can take its rightful place at the forefront of the genre." XLR8R described their sound as ?darkness mixed thick like a pool of blood? and advised listeners to ?take with a stiff glass of Absinthe.? Danger Mouse likened their music to ?the end of the world? and King Britt noted that ?their music restores my faith that deep, dark music still moves the masses."