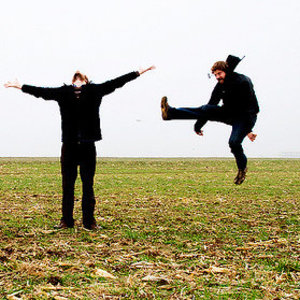 Quiet Company, led by Taylor Glen Muse, is one man's vision brought to life with a little help from his friends. Hailing from Austin, Texas, Taylor Muse already has years of experience under his young belt, having fronted and played in many bands, including an early version of Eisley. Taylor played drums and guitar in early incarnations of The Lonely Hearts (a.k.a. Holland, a.k.a. Somerset) but opted not to make the trek away from East Texas to join them in Nashville, TN.

He recorded several tracks under the moniker Quiet Company that he released independently while playing with his band The Connotations. After the band's breakup, Taylor hoped to complete an album of collected contributions from his extensive cast of musician friends. Instead, he played nearly everything himself, and ended up with a very personal and visionary endeavor entitled Shine Honesty.

Several of the tracks on Quiet Company's debut album, Shine Honesty, were arranged and composed while Muse was fronting The Connotations. After some soul searching, The Connotations decided to part ways after their only official release, Trouble by The Truckloads from Mono Vs Stereo's The Revolution Will Begin In The Blink Of An Eye compilation. Muse took a handful of the songs that they had demoed and recorded Shine Honesty with Alex Bhore in May 2005. With the record completed, Muse began auditioning band mates to play his newly forged tunes.

Muse self-packaged CD-R copies of the new album with black & white covers and began to pass them around amongst friends and sold them at shows in Texas. Northern Records heard the unmastered version and invited Taylor Muse and Quiet Company to find a home with them. Andy Prickett lended his own brand of expertise in the mixing and mastering of the album and on March 23, 2006, Northern Records released Shine Honesty.

In October 2007 they completed their first music video for the song "Fashionabel", from Shine Honesty. The video was shot in Nashville, TN by New Valiant Productions and directed by American film maker Cameron McCasland. The video was released on YouTube on October 30, 2007, subsequently outshining new videos from Paul McCartney, Daft Punk, Yellowcard, and Korn. The video was picked up by MTV Canada and is currently playing in rotation and on demand.

Quiet Company recorded "Have Yourself A Merry Little Christmas" for the 2007 release of Peace on Earth: A Holiday Album. The album was made available for download directly from the web. All proceeds from sales went to the Toys for Tots charity.

Quiet Company is currently touring nationally. In 2007 they were runners-up in the Austin City Limits ACL Fest in Austin, TX.

In 2009, they released a new album called Everyone You Love Will Be Happy Soon. In 2010, the band followed-up their second album with an EP, entitled Songs For Staying In.

Baby, It's Cold War Outside

Your Husband, The Ghost (EP)

We Are All Where We Belong

Everyone You Love Will Be Happy Soon