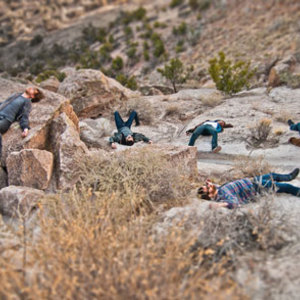 New York was wearing on Kyle Wilson, lead singer & songwriter for the Brooklyn-based quintet Milagres. So he took off, away from the city and his band and his issues? all the way to the coldest, most remote part of British Columbia where he could get some space and breathe. As so often happens in life, he got a little more space than he bargained for ? during a rock climbing trip he fell and ended up spending months bedridden with a back injury.

Before he left New York, Wilson had thought he might leave the band behind entirely. But during the long days of his recovery he found himself writing songs again, and he realized he wanted to go back.

Upon his return to NYC, Wilson drafted Fraser McCulloch (bass, backing vocals, keys) into his new vision of Milagres, sharing with him the arrangements that he dreamt of while recovering from his injury. These demos were then refined with the addition of Eric Schwortz (guitar, backing vocals, percussion), Chris Brazee (piano/keys) and Steven Leventhal (drums, percussion), evolving into what would become the new group's first LP, Glowing Mouth.

The musical scope of the album is big and due to the piano-based melodies and soaring falsettos, early press has compared the band to artists as diverse as Grizzly Bear and Prince, demonstrating the wide breadth of Milagres material. The first single, "Glowing Mouth", is a slow-burner made for dancing close on a hot summer night, whereas "Here To Stay" has a keyboard hook that won't let you sleep. Kyle Wilson has a knack for writing dreamy story songs that also pack a punch in both chorus and melody. Songs like "Gentle Beast" and "Gone" suck you in and then haunt you for days afterwards ? this is an album that stays with you.

Glowing Mouth is set-to-be released on Kill Rock Stars on Sept. 13, 2011. According to KRS boss Portia Sabin, Milagres is the first band she has signed to the label sight-unseen. ?I just fell in love with the album and lost my head,? Sabin says. ?It's not a good chance to take, signing a band without seeing them live, but when I finally did it was totally worth it ? they were even better live than on record, which is hard to do.?