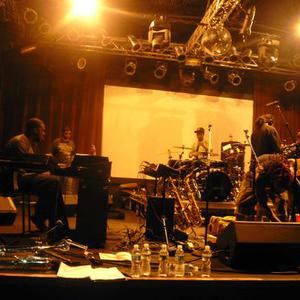 ?Real music is crash protected,? state the liner notes of Black Radio, a future landmark album by the Robert Glasper Experiment that boldly stakes out new musical territory and transcends any notion of genre, drawing from jazz, hip-hop, R&B and rock, but refusing to be pinned down by any one tag. Like an aircraft's black box for which the album is titled, Black Radio holds the truth and is indestructible.

Robert Glasper has long kept one foot planted firmly in jazz and the other in hip-hop and R&B. He's worked extensively with Q-Tip, playing keyboards on the rapper's 2008 album The Renaissance and co-writing the album single ?Life Is Better? which featured his label mate Norah Jones. Glasper also serves as the music director in yasiin bey's touring band, and has toured with the multi-platinum R&B singer Maxwell.

The Los Angeles Times once wrote that ?it's a short list of jazz pianists who have the wherewithal to drop a J Dilla reference into a Thelonious Monk cover, but not many jazz pianists are Robert Glasper,? adding that ?he's equally comfortable in the worlds of hip-hop and jazz,? and praising the organic way in which he ?builds a bridge between his two musical touchstones.?

Glasper drove that point home with his last album, 2009's Double-Booked, which was split neatly in half. The first part featured his acoustic Trio, which had gathered a great deal of acclaim in the jazz world and beyond over the course of two previous Blue Note albums (2005's Canvas and 2007's In My Element). The second part featured his electric Experiment band and hinted at things to come, even earning the keyboardist his first GRAMMY nomination for ?All Matter,? a collaboration with the singer Bilal that was among the contenders in the Best Urban/Alternative Performance category in 2010.

With Black Radio, the Experiment band has fully arrived. Featuring Glasper on piano and Fender Rhodes, Casey Benjamin on vocoder and saxophone, Derrick Hodge on electric bass, and Chris Dave on drums, the band is plugged in and open source. Each of the band members is prodigiously talented and lives naturally in multiple musical worlds, distilling countless influences into a singular voice. ?That's what makes this band unique,? says Glasper. ?We can go anywhere, literally anywhere, we want to go. We all have musical ADD and we love it.?

?I wanted to do a record that showcased the fact that we play with artists in other genres,? explains Glasper, adding that the album has ?more of an urban, hip-hop, soul kind of vibe, but the spine of it all is still a jazz spine.?

What may be most remarkable about Black Radio is how Glasper (who also produced the record) was able to weave all these different voices into a cohesive album, avoiding the random patchwork feel that many ?special guest? projects suffer from. ?The record doesn't seem like it's a special guest record because of the relationships we all have,? he says. ?These are all friends. All the guests on the album have musical similarities.?

That common ground and comfort level is what created the spontaneous spirit of adventure and experimentation that permeated the recording sessions, which all the band members describe as being more fun than work. Friends would drop by the studio in Los Angeles to hang out, listen to the band, get inspired, and jump into the vocal booth to lay down a track. ?These are all people who are known for being in another genre,? says Glasper, ?but at heart they're jazz musicians, so they're like ?Let's hit it. We don't really know what's going to happen but let's go for it and see what happens.' We all have that in common, which is why I chose the people I chose.?

?You can't pigeonhole what we're going to do or how we're going to do it,? Glasper declares. The Experiment wears its eclecticism on its sleeve throughout Black Radio, presenting new collaborative originals and surprising cover songs. They transform the Afro-Cuban standard ?Afro Blue? with Badu, Sade's ?Cherish the Day? with Hathaway, David Bowie's ?Letter to Hermione? with Bilal, and Nirvana's ?Smells Like Teen Spirit? with Benjamin's vocoder vocal.

Glasper and Lupe Fiasco (whose recent gig together at the Blue Note Club in New York became a freestyle jam session when Kanye West and yasiin bey crashed the stage) co-wrote ?Always Shine? which features Fiasco's lyrical flow as well as a searing chorus sung by Bilal. On ?Gonna Be Alright,? the R&B singer Ledisi highlights Glasper's bright melodicism by writing new lyrics for his instrumental ?F.T.B.? from the In My Element album.

The track ?Ah Yeah? (a co-production with Glasper's high school friend, the GRAMMY-winning producer Bryan-Michael Cox) is illustrative of the good fate that hung over the sessions. Glasper went to Atlanta to record with Musiq Soulchild at Cox's studio. At a show the night before the session Glasper ran into singer Chrisette Michele and asked her to come by the studio as well the next day. The resulting duet is one of the album's highlights.

Reflecting back, Glasper is rightly proud of Black Radio, but also humbled and grateful for the outpouring of support and talent that it took to bring the album into being. ?Everyone just said yes, period, we'll do it. It was smoother than I ever thought it would be to get all these great, amazing artists to come together and do this project.?