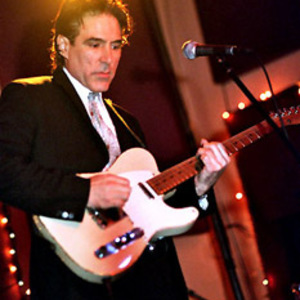 With seven albums of original material and guest appearances on dozens of recordings; from the Bammie-winner's contribution on Cake's million-selling "Prolonging the Magic" to (most recently) doing lead guitar duties with The Little Willies, his band with Norah Jones, Campilongo's virtuosity and originality has inspired a generation of guitar players. His songwriting uses a palette of Blues, Country, Jazz and Rock with a sensitivity and wit that has also earned him the broad fan base most instrumental guitarist never enjoy.

Campilongo's career began in the mid 1970s when he studied guitar in his native San Francisco with the eccentric Bunnie Gregoire, who taught the pre-teen to embrace everything from George Van Eps to John Denver. Campilongo recalls, "Before Bunnie I used to just randomly buy records if there weren't that many songs on them, I didn't care who the artist was. A banner day would be discovering a double album that only had two songs on it. So I ended up with John Coltrane Live in Japan and John McLaughlin's Devotion with Larry Young on organ. I listened to those records until they melted and I still do to this day (on CD). Eventually, I found Roy Buchanan's first album and all bets were off, I was going to be a guitar player." Jim's first instrument was purchased with Green Stamps.

In addition to Chet Atkins and Roy Buchanan, Jim began to be deeply affected by Muddy Waters and the Sex Pistols. Around this time he was given a 1959 Telecaster by an appreciative student in exchange for successful bass lessons. "Playing that '59 Tele changed everything for me," Campilongo remembers, "It was like it told me to get serious." Soon after, he formed the hugely popular Ten Gallon Cats, which featured pedal steel guitar and Jim's ever-expanding Country/Jazz vocabulary. They recorded three CDs.

Jim broke from the Cats and reached a creative pinnacle in his existing body of work with 1998's Table For One, a collection of winsome and elegant compositions praised by Billboard as, "Americana at its most touching". Guitar Player affirmed the CD as a showcase for Campilongo's "darkly romantic melodicism". The record also garnered Campilongo a new level of recognition.

In 2002, Campilongo pulled up stakes and moved to New York, where he formed his Electric Trio, which toured Europe and Scandinavia and recorded the acclaimed CD American Hips, lauded by Guitar Player as "easily his best effort to date". No Depression raved, "Campilongo meets himself every time he picks up his instrument; that brand of artistic bravery is rare and to be treasured." Since 2004 the "Campy Trio" reigns each Monday night at New York's Living Room, a residency that Time Out New York recommended as "one of the city's strongest".

Live At The Du Nord