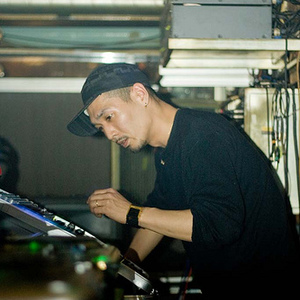 A unique producer with a unique style, Goth-Trad (of Rebel Familia) has emerged from the Japanese electronic scene in the last few years as one of the most arresting artists from his generation. Freely playing samplers, keyboards and even self-made instruments, ?The Sound Originator' Goth-Trad creates remarkable dance music with an abstract approach. Goth-Trad started making music in 1998, experimenting on his own at first before eventually forming the Rebel Familia unit in 2001 with Takeshi ?Heavy' Akimoto (ex-member of Dry & Heavy, a legendary Japanese dub and reggae act).

Goth-Trad started making music in 1998, experimenting on his own at first before eventually forming the Rebel Familia unit in 2001 with Takeshi ?Heavy' Akimoto (ex-member of Dry & Heavy, a legendary Japanese dub and reggae act).

In the years that followed he continued to develop his own sound alongside that of Rebel Familia, giving himself diverse avenues in which to experiment with different sounds, styles and structures.

From abstract electronica to noise, from dub and reggae to jungle and rave music, grime to dubstep, Goth-Trad has always experimented and in the process developed his own unique style: blending influences and delivering music that is constantly evolving.

From 2001 to 2004 Goth-Trad burst out of the Tokyo underground and put his name on the map with his first European tour, the release of his first solo album, ?Goth-Trad I', showcasing his amalgamation of sounds and influences developed over the years, and by opening for The Mars Volta during their 2004 Japanese tour.

His second album, ?The Inverted Perspective', was released in January 2005, focusing on the improvisational live style he had been developing in recent years. A style he would continue to refine to this day. In March he played in Korea and in the summer established a new style called ?Mad Rave'. ?Mad Rave' is Goth-Trad's own take on dance music, refined and musically distilled through years of work.

This led to his third album, ?Mad Raver's Dance Floor' released in November 05. Over 10 tracks, the album condenses more than ten years of dance music into an amalgamation of styles which flows seamlessly and leaves the listener captivated. The release tour for the album travelled to Berlin, Paris, Metz, London and 8 Japanese cities. Everywhere he went, people wanted more.

2006 saw the release of the first single from the album. Goth-Trad continued to develop and refine ?Mad Rave', creating music which would soon find a growing appreciation amongst the dubstep community, in the UK and abroad. An appreciation and interest started by a single track taken from his third album - ?Back To Chill'.

The track would soon become synonymous with dubstep and Japan, as Goth-Trad launched the country's first monthly dubstep night in 2006, rightfully entitled ?Back To Chill'. The track, influenced by the grime sounds emerging out of London in the early 2000s, finally saw a vinyl release 2 years after its conception, on the UK label Skud Beats.

By the end of 2006 Goth-Trad had embarked on his fourth European tour, playing in Germany, France and the UK, where he appeared on Resonance FM for the second time and most importantly where he met with dubstep pioneer Mala from Digital Mystikz, at the seminal dubstep night FWD>>.

This meeting led to continued and increasing respect and interest from across the dubstep and electronica scenes in Europe and the US with people like The Bug, Kode 9, Blackdown, Juju and Skream all showing their interest in Goth-Trad and his music. Mary Ann Hobbs also showed her interest and appreciation by playing some of his tracks on her Breezeblock show on BBC Radio 1.

In 2007 Goth-Trad kept building on all this previous work, showing no signs of stopping.

He debuted on UK labels Skud Beats and Deep Medi Musik, with two 12? releases that quickly sold out; Rebel Familia released a new album, including collaborations with legends Arie Up and Max Romeo, and toured the release; in March he opened for Mala during the Japanese leg of the DMZ tour, in May he played alongside Skream in Tokyo, in June he toured Japan with Noize Creator and in July he toured the country again alongside Kode 9 and The Bug; in addition to all this he also started collaborations with various artists, including Distance;

September 2007 marked a crucial moment in his career as he embarked on his fifth European tour, this time taking in 10 cities in 8 countries over one month including the UK, France, Spain, Belgium, Germany, Holland, Czech Republic and Slovakia. Goth-Trad played live at each of the dates, performing his own classics and brand new tracks in front of eager audiences.

In the UK he was invited by Mala to play at the now legendary DMZ night. He became the first artist to play a live show at the event, showcasing his own take on the sound pioneered by so many of the DJs and producers who have appeared on the bill in the past. His eclectic and varied live show received an exceptional reception from the crowd, showing how far his sound had travelled since he started more than ten years ago.

Whilst in London he performed live on Hatcha & Crazy D's dubstep show on Kiss 100FM, one of the capital's leading radio stations. He also appeared on the Boomnoise & Pokes show, on Sub FM.

In Holland he performed alongside fellow Deep Medi Musik artists Mala, Quest, Hijack, Kromestar and Sgt. Pokes, once more receiving a warm reception. And in Belgium he appeared at another world-famous event,the ?Breakcore Gives Me Wood' party.

In the first half of 2008, he released two new 12?s on Skud Beats and Soul Jazz Records and toured Europe for the sixth and seventh time in February and May. And for the first time, he toured China in April and Australia in June.

Back in Japan he continues his relentless live and studio work as well as fostering and showcasing new Japanese talent at his own BTC night. His music can also be heard on various multimedia projects, including soundtracks.

As Hyperdub label head Kode 9 put it ?Goth-Trad is a one-man army', relentlessly working on spreading his music as far and to as many people as possible.