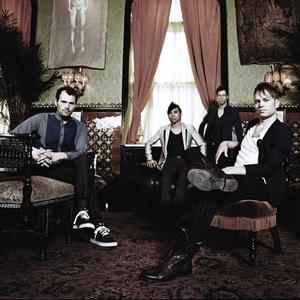 Check Atomic Tom On Tour Now! In the fall of 2010, armed with nothing more than their iPhones, the New York quartet?Luke White , Philip Galitzine , Eric Espiritu , and Tobias Smith ?boarded a crowded New York City B train for an "impromptu" performance of their single, "Take Me Out". A captivated subway car watched as they expertly played the song using only their smartphone apps with White singing his heart out from his seat.

In the fall of 2010, armed with nothing more than their iPhones, the New York quartet?Luke White [vocals], Philip Galitzine [bass], Eric Espiritu [guitar], and Tobias Smith [drums]?boarded a crowded New York City B train for an "impromptu" performance of their single, "Take Me Out". A captivated subway car watched as they expertly played the song using only their smartphone apps with White singing his heart out from his seat. Being prescient 21st century rockers, they filmed everything and uploaded it to YouTube immediately. The clip became a viral phenomenon, exceeding 5 million views and making "Take Me Out" a bona fide hit. However, that's only a snapshot of the band's journey thus far.

Their Universal Republic Records debut, The Moment, dropped in stores on November 22nd, 2010, and Atomic Tom began to make waves across pop culture beyond the digital realm. They performed "Take Me Out" on Jimmy Kimmel Live, Lopez Tonight, The CBS Early Show, and Rachel Ray, while also appearing on The Today Show, E! News, and Fuse TV's A Different Spin with Mark Hoppus. The band also toured tirelessly across North America, their on-stage prowess converting curious concertgoers into die-hard fans.

"Take Me Out" holds a special place in their hearts though. "It's a vulnerable song," reveals White. "It's about letting people into your life and letting them rescue you. It's not easy, but it's something that everyone goes through."

That vulnerability pulsates at the heart of Atomic Tom's electro-infused pop rock party. They even managed to instill a little bit of that in their kinetic cover of Human League's "Don't You Want Me" for Relativity Media's heartfelt '80s comedy, Take Me Home Tonight. The song was the lead-off single for the film's soundtrack, and its '80s-tastic music video features the band rocking out with stars such as Topher Grace, Anna Faris, Dan Fogler, and Teresa Palmer.

Most importantly, this re-imagining continues a band tradition. Galitzine goes on, "It's possible to reach each and every individual in an eighty thousand seat stadium. You can make an enormous towering sound and still say something deeply meaningful and musical."

That's something that their newest singles, "Collide" and "Break My Heart Around You", produced by Don Gilmore, also achieve. Weaving together elegant synths, anthemic guitars, and hyper-catchy hooks, both tunes see Atomic Tom perfecting their patented style. "There's a lot of magic on there," adds Espiritu.

Atomic Tom have only begun making "magic" though. White concludes, "We've got something very special together, and it's been amazing to share that with the world. I can't wait to see where this train takes us next."

The Upside Down And Backwards (EP)