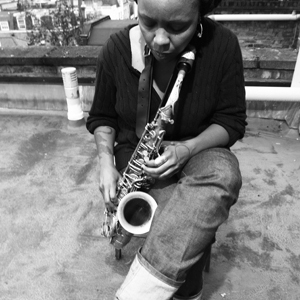 Matana Roberts is a jazz saxophonist, composer and improviser based in New York City. She is a member of the Association for the Advancement of Creative Musicians (AACM). The Jazz Journalists Association selected Roberts as a finalist nominee for the 2008 "Up and Coming Musician of the Year" award (which Lionel Loueke ultimately won). Born in Chicago, Illinois, Roberts was raised on the city's South Side and studied classical clarinet during her youth.

Born in Chicago, Illinois, Roberts was raised on the city's South Side and studied classical clarinet during her youth. She formed a trio, Sticks and Stones, with bassist Josh Abrams and drummer Chad Taylor, with whom she regularly performed at the Velvet Lounge. In 2002, Roberts moved to New York, initially busking in subways and publishing a zine, Fat Ragged, about her experiences.

Roberts is the composer of Coin Coin, a musical work-in-progress about her family history, including the life and times of Marie Therese Coin Coin. Roberts performed at the London Jazz Festival in 2007. In 2008, Central Control released Roberts' The Chicago Project. The album, produced by Vijay Iyer, includes performances by members of Prefuse 73 and Tortoise along with AACM saxophonist Fred Anderson.