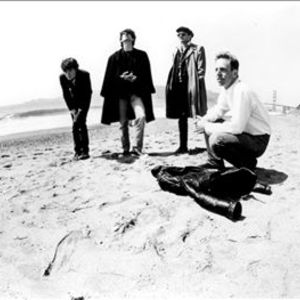 Inspired by the Beatles, the four-piece Translator featured the talents of two singer/songwriters, Steve Barton (guitar) and Bob Darlington (guitar), and a sound that spanned Merseybeat to psychedelia. Larry Dekker on bass and Dave Scheff on drums completed the lineup, which remained constant during the band's seven-year stay. Formed in Los Angeles in 1979, the band relocated to San Francisco and were swiftly signed to Howie Klein's independent label, 415 Records, on the strength of their demo version of "Everywhere That I'm Not," the song that would remain the band's signature tune.

Formed in Los Angeles in 1979, the band relocated to San Francisco and were swiftly signed to Howie Klein's independent label, 415 Records, on the strength of their demo version of "Everywhere That I'm Not," the song that would remain the band's signature tune.

Heartbeats and Triggers (415/Columbia 1982), produced by David Kahne, was a college-radio hit and contained the hit single "Everywhere That I'm Not". The second album, 1983's No Time Like Now featured the hit "Un-Alone". The band was struggling to break away from the tight new wave formula and started to on their lush, third album from 1985 produced by Ed Stasium, simply titled Translator. As the decade wore on, the band became increasingly interested in exploring psychedelia, and their live shows were often three-hour affairs. Their final album (also produced by Stasium), Evening of the Harvest (1986), was the sound of a band that had matured and was their most realized statement. Everywhere That I'm Not -- A Retrospective was released by Columbia in 1986. Two more CD retrospectives were released on the band, Translation on Oglio and Everywhere That We Were -- The Best of Translator by Columbia Legacy in 1995 and 1996, respectively. All four of the band's original albums are available on CD and on iTunes. The band reunited at the South By Southwest (SXSW) festival in Austin in 2006 for three very well-received shows. More reunion shows are being planned for 2009 & 2010.

Steve Barton now has a band called Steve Barton And The Oblivion Click. It is a trio with Steve, Robbie Rist (Cousin Oliver from The Brady Bunch) and Derrick Anderson (current Bangles bassist). Their new 20-song CD called "Gallery" is out on Spectra Records. All of the former Translator members still play music. Drummer Dave Scheff recently toured the U.S. and UK with Dead Kennedys. Robert Darlington is a published poet, whose collection "Ether" is now available. Larry Dekker continues to add his melodic solid bass playing to a variety of bands.

Everywhere That We Were: The Best Of Translator

Evening Of The Harvest