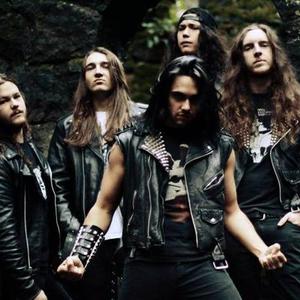 1. Carrying on the proud legacy of Pacific Northwest heavy metal bands such as MALICE, METAL CHURCH, early QUEENSRYCHE and SANCTUARY, SPELLCASTER formed during early 2009 to prove that traditional heavy metal is alive and well in the USA. After solidifying their lineup, SPELLCASTER hit the studio in late 2009 to record and self-release their debut three song CD EP entitled Spells of Speed. Catching the attention of New York's Heavy Artillery Records, the band were offered an opportunity to join the label's growing roster.

Spells of Speed was re-released with bonus tracks during October 2010 becoming the first installment in the label's now popular ?Wax Maniax? demo series of limited edition vinyl and CD demo releases. The limited edition of 200 MLPs and 200 CDs sold out almost immediately and gained high praise from the metal press. Having completed their first North American tour during late 2010, SPELLCASTER returned home to their native Portland to put the finishing touches on the songwriting for their forthcoming debut album Under the Spell before hitting the studio during December 2010 to begin laying down the tracks.

Now armed and ready for battle, SPELLCASTER prepare for the release of "Under the Spell" on July 12th with two record release shows in the Pacific Northwest before finalizing plans for their next North American tour during late summer.
2. A one man experimental guitar project from Denver, Colorado