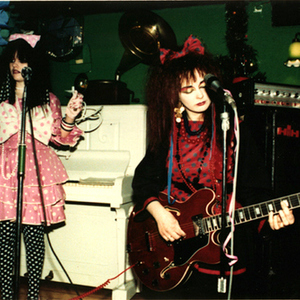 Strawberry Switchblade was a new wave band from Glasgow, Scotland in 1981. A Scottish female duo, Rose McDowall (who would later become associated with the industrial scene and contribute to projects such as Coil, Current 93, Death in June, Nature and Organisation, Nurse With Wound, Psychic TV, Boyd Rice, etc) and Jill Bryson bonded during the Glasgow punk scene of the late 70s, first as friends, then as bandmates.

With their distinctive style (garish colours, polka-dots and a slight geisha influence) already intact they formed Strawberry Switchblade (named after a never-released Orange Juice song and quickly aborted fanzine) in the early 80s. After signing to Warners they moved to London, and released the single Trees And Flowers in June 1983. Deceptively pretty, while actually written about Jill's agoraphobia, it topped the indie charts and generated some hype.

They then hit the big time with the infectious hit "Since Yesterday" which reached #5 in the UK in November 1984, featuring Roddy Frame of Aztec Camera on guitar, Mark Bedford of Madness on bass and Boris Williams, later of The Cure on drums. Following this, their self-titled album was released in mid 1985, though by then the pop world had moved on and the later singles Let Her Go and Who Knows What Love Is failed to make much headway. Plans for a second album were aborted as Jill decided to end the band and returned to Glasgow and painting. Although their success has never been repeated, the band has a cult following which enjoyed a revival in the early 90s when the song was re-released and covered in Japan. For more information visit the colourful and well-informed site http://www.strawberryswitchblade.net