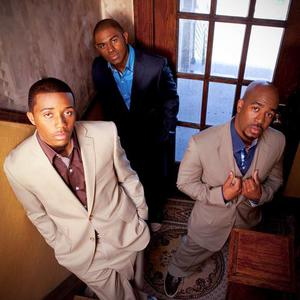 Teen idols come and go. They have the looks, the hits, and the adoring fan base to propel them to superstardom, but it's all a man-made illusion: As soon as the music fades and the machine behind them ceases to operate, they quickly die out, their lifespan reduced by the sinking sand on which they're built. Then there's 21:03. Unlike the scores of teenage heartthrobs before them, the group is cut from an entirely different mold.

Then there's 21:03. Unlike the scores of teenage heartthrobs before them, the group is cut from an entirely different mold. Total Attention, their head-turning second album, proves that their rise to the top rungs of faith-based R&B wasn't manufactured, but a direct result of their rock-solid foundation and exponential growth as artists, performers, and ministers.

When 21:03 first hit the urban gospel scene with its watershed debut, PAJAM Presents Twenty One O' Three, they were slowly finding their voice and place in an already cluttered marketplace. With Total Attention, the trio cements its identity, assuring the world they're not a flash in the pan. They're here to stay.

Things were rough at first. Handpicked by production supergroup PAJAM from hundreds of candidates during a casting call in their native Detroit , then-hopefuls Evin Martin, Torrence Greene, and Jor'el Quinn were three strangers chosen on the basis of their faith, as well as their singing and dancing abilities.

Sensing the young men had great potential, and acutely aware of the short shelf life of assembled, teen-based urban acts, the PAJAM team-Paul "pda" Allen, Walter Kearney, and J Moss-went to great lengths to groom 21:03 into something more substantive: a trio that could really leave a long-lasting imprint for the Kingdom.

To that end, the recruits were subjected to a six-month entertainment boot camp-a grueling period of artist development that harkened back to the glory years of Motown. After an intense season of vocal, physical, and spiritual formation, PAJAM finally cast the definitive vision for its prot?g?s on January 21, 2003-the fateful day that inspired 21:03's moniker.

As Evin, Torrence, and Jor'el matured in their faith and as performers, it wasn't long until they realized that three passages taken from the beginning, middle, and end of the Bible-Genesis, Psalms, and Revelation 21:3, respectively-provided a deeper look into their mission. The near-prophetic verses reinforced in them that their purpose wasn't to just sing, dance, or entertain, but to actually minister and impart truth to anyone with ears to hear.

"We've grown spiritually," Evin says of the period between their first album and Total Attention. "We have a better sense of our ministry and our call. We know that there's a dying world that needs Jesus and they need to see him in music, in the media, in the church, and in us. We want to be those examples."

To get to that point, 21:03 faced its share of uphill battles, but none was bigger than the one Evin had to weather. Unexpectedly, the 21-year-old looked death straight in the eye when he confronted the back-to-back loss of both of his parents-his mother succumbed to multiple sclerosis right as the trio's debut released, and his father lost his bout with cancer in the months leading up to Total Attention.

"The loss of one parent can be crippling. But the loss of two is devastating," Evin says. The singer was not left alone: His unwavering faith in Christ and the unending spiritual and emotional support of his 21:03 and PAJAM brothers carried Evin through the storm, weeping with him and making sure he had a shoulder to lean on.

"That's something you have to be led by God to do," Jor'el, 19, says. "We had to support him because we're accountable for each other. We're brothers. We're family. It was almost second nature."

"People say your misery is your ministry," Jor'el continues. "That's something that's been proven in this group. When Evin opens up his mouth now, you feel a little bit he has been through something. You know it's nothing but the Lord-that God is with him."

Evin concurs: "I can say with all assurance and confidence that I know that I'm called. I know that I'm chosen. I'm now officially known as a living, breathing, walking testimony of the power of Christ. I can definitely say I have more fervency. I have more wherewithal to do what I'm doing."

"It's time to get our lives together," Jor'el says after quoting the Gospel appeal found in Mark 1:15. "It's time to stop playing. Let's get out of the mentality, ?I'll get right tomorrow.' Tomorrow is never promised. We want to encourage the young and the young at heart that God is coming back. God is not playing with us. He wants our full heart."

"It's not boring to be a Christian," Torrence adds. "To be a Christian isn't wack. It's an exciting experience when you walk with Christ. We can get so easily distracted by things around us, but God wants your total attention. This is a time to stay focused."

Evolved... From Boys To Men