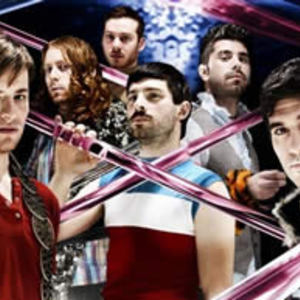 TJ Penzone - vocals Rick Penzone - bass Todd Weinstock - guitar Jason Gimmule - guitar Nick Conceller keyboards, programming David Sullivan Kaplan - drums When you think about it, says Men Women & Children guitarist Todd Weinstock, there was a time where this seemed like a joke. Now, its become everything. Really, I have no friends. This is all we do. Two years ago, Weinstock would have never predicted that the far-fetched idea he began kidding about with his friend...

When you think about it, says Men Women & Children guitarist Todd Weinstock, there was a time where this seemed like a joke. Now, its become everything. Really, I have no friends. This is all we do. Two years ago, Weinstock would have never predicted that the far-fetched idea he began kidding about with his friend, programmer Nick Conceller, would overtake his life and lead him to a nationwide tour with English socio-punk trailblazers Gang Of Four or the recording of the bands Reprise Records debut, but it has. Which is why its even more ironic that Men Women & Children began as a sort of well-kept secret. Like Weinstock, Conceller (a bedroom DJ from St Louis who had first befriended the guitarist on tour with his old band, Glassjaw) had grown tired of rocks current woe-is-me tendencies and wanted to quietly create something that was more a grand, fun spectacle. Still, their initial plans were only winkingly huge. Even before we had songs, I would say to Nick, This has to be a production, Weinstock recalls with a laugh. It had to be over the top. There had to be lights and production. This couldnt just be an ordinary show with five guys standing on stage in t-shirts and jeans. We just thought, Huge.

But now, this is the reality in which Men Women & Children currently exist. Things are over the top and huge and just as Weinstock hoped, the band (Weinstock, Conceller, singer TJ Penzone, brother/bassist Rick Penzone, drummer David Sullivan Kaplan and now-permanent guitarist Jason Gimmule) have even created a live production so ambitious that at their first show in New York City, their lighting rig caused the power in a tiny Lower East Side club to cut out five times. But, as evidenced by the crowd that night, the songs the band has presented alongside this are the real show; upbeat examinations of late nights that can be both infectious and freeing.

People talk about getting their problems out through music, but theyre usually just complaining, Weinstock insists. For me, this is cathartic. Its about having fun. Achieving that balance, however, isnt something that Men, Women & Children would manage to do overnight.

In its earliest incarnation, the project was a decidedly casual endeavor. It began with just Kaplan and Weinstock back in New York, who would send self-recorded tracks of electro, rock and funk leaning works over to Conceller, who was still living back home in Missouri. There was very little attention given to making this a full functioning band at the time, and it wasnt until six months into the process that Conceller relocated to Manhattan. Weinstock was in Hong Kong when the mixes of the projects first two songs came in (Lightning Strikes Twice In New York and Dance In My Blood), using a computer in a public library to download the files. This was not exactly the same as five guys jamming in a basement. That was hard for me because Ive never done anything this way, Weinstock says. Before, I was always in a band and then the band went and recorded. With this there were no givens. We didnt know for sure what was going to happen.

Penzone, an old friend from growing up in Long Island, was the first to join the developing Men Women & Children fold; he promptly composed the lyrics for Dance In My Blood after hearing the songs demo driving around with Weinstock. He became the singer, Weinstock jokes, because he was the one sitting next to me. TJ quickly drafted his brother Rick, a multi-instrumentalist who added a whole new element to the band. Gimmule was later asked to join as a touring member but he had to wait for the band to finish writing their debut. (Originally they figured this would last five months; try a year-and-a-half.) The general writing process for the bands debut was that for every one song that was recorded, three versions of it were written. Theyd spend months analyzing the music and the intensity of this process soon lead to a unique and at times caustic inner-band relationship. Its like this, Conceller says with a telling smile. You know when you have a brother and you can punch him in the face and ten minutes later youre having a drink with him. That is this band.

And then some. The six incredibly strong-personalities in Men, Women & Children have always managed to create a necessary degree of tension. Just choosing their bands name took eight months, four meetings, at least five screaming matches and before their first headline show in New York, they nearly broke upat soundcheck. Over the past two years, though, such conflicts have been at the base of their existence: things can occasionally reach a breaking point, but that tension only serves to drive their art.

Upon decamping to Lincoln, Nebraska with Bright Eyes producer Mike Mogis last winter (yet another edgy, but formative, period in the bands trajectory), they had begun distilling Men, Women & Childrens creative process into a record that would eventually sound as disparate as the locations it was recorded and as intense as the individuals behind it. Writing these songs there was a lot of stress, Penzone says plainly. But I feel like that became the basis of the whole band. To make something that was funsomething that when you walk into it, you can forget about your own life for a while.

One of the first lines that Penzone wrote in Weinstocks car later became the chorus of Dance In My Blood. Its a simple but telling refrain that summarizes the album they would finish in Los Angeles, first with Rick Rubin protg Jason Lader and partner Raine Maida and then, later, with Ima Robot producer Josh Abraham. Within Dance In My Blood, Penzones infectious falsetto insists: You don't need a reason to get out on the dance floor. Its a simple but affective call to arms and, right now, this band is about exacting that sense of liberation both musically and personally. This is something we keep saying, but everyone takes themselves so seriously, Weinstock notes in conclusion. I just wanted to make fun music and have fun writing songs. Fortunately, thats what this has turned into. For something that started as a secretive joke, thats about as serious as this band will ever purposefully appear. Which pretty much leaves you with just one thing left to do: Get out there and join them.