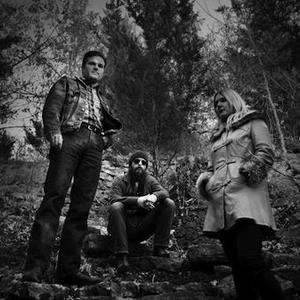 Up from the warm, almost oppressively humid Texas air rises a din. The sound is created by only three people. For now, we'll just call them D.H., Nikki and Slim. The music that they are creating might be the aural equivalent of walking down a farm-to-market road on a foggy morning just before day breaks. The clamor began in November 2007 when these three humans came together to form True Widow.

As is to be expected, they set about committing this alchemy to tape and from this arose their self-titled debut in November 2008. True Widow was recorded by the more-than-capable hands of Matt Pence at his Echo Lab studio. But then came time to spread the good word. So they headed out West and then out East, bringing their simultaneously breathless and heavy live set with them.

Of course, they don't expect you to just take their word on all of this. Fader Magazine said: ?True Widow, who grabbed those lackadaisical grunge breakdowns we didn't even realize we missed, and drew them out in an epic swell of apathy and stoned whateverness". And back to that live show. Crawdaddy said of the band's 2009 set at the Noise Pop Festival in San Francisco: ?a mix of shoegaze and post rock with beautifully mellow vocals and menacing undertones, displaying a knack for delivering the rock goods while keeping the pace slow and steady with dynamics loud then soft?pretty downer music that manages to go interesting places even when it's drenched in monotonous sludge. No gimmicks, just awesome music."

So now they look out over the horizon. The demos for their forthcoming follow-up show an outfit that have, according to the band, ?found ourselves within the band and are in great places with each other, musically and personally.? A full roster of shows across the country proves that True Widow are building up a head of steam and that word is spreading quickly about this most unique of acts. They are at times heavier than francium, and at other times whisper-soft, like a hazy lullaby from a distant future.