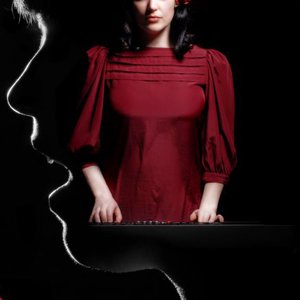 Bachelorette is the solo delivery vehicle for New Zealand based home recording tinkerer Annabel Alpers. We visualize the music of Bachelorette beaming through distant star systems, gliding and bouncing through a matrix of coolly illuminated neural pathways. Yet, all the songs on her new album were written on Earth: Radley, UK; Tripoli, Libya; Millwood, VA; Brooklyn, NYC and back home in Auckland, NZ. Annabel Alpers (the heart behind Bachelorette's machine) is no sky-bound jet-trash. Her new, self-titled album has a corporeal, sensual tangibility.

We visualize the music of Bachelorette beaming through distant star systems, gliding and bouncing through a matrix of coolly illuminated neural pathways. Yet, all the songs on her new album were written on Earth: Radley, UK; Tripoli, Libya; Millwood, VA; Brooklyn, NYC and back home in Auckland, NZ. Annabel Alpers (the heart behind Bachelorette's machine) is no sky-bound jet-trash. Her new, self-titled album has a corporeal, sensual tangibility. If you were a fan of the wildly under-heard Isolation Loops and My Electric Family, you will be touched and torched once again by her deep-space solitude and the soulful ache that radiates from her best songs.

Annabel Alpers dreams the trappings of her electro psych pop ? her melodies, her minimal lines of synth and harmony vocal ? and then brings the complex shades of this vision into our world through her music. Changing geography doesn't actually change the conditions that we live in. Wherever you go, there you are, right? However, everywhere is somewhere, and all the traveling done in the last year or so of Bachelorette's life has to seep somehow into her rich-toned amalgamation of sounds. When organic waves enter her work ? as cathedral chimes did in Oxford ? they return swathed in a lunar halo.

Bachelorette is epic from its very genesis. Hovering over a fluttering blanket of voices, a ghostly vision of the future is distilled with the same seductive inevitability of a Greek oracle in ?Grow Old With Me.? With the controls to her destiny thus programmed, Annabel gestures toward an alien visitation ? or is it an all-too-human introspection? Her metaphors are a strong tonic, entertaining with their surfaces while the sounds race to your heart. BacheloretteBachelorette's great triumph is that her abundant pop melodies displace any heroic presumption associated with such a complex undertaking. Whether wandering through the labyrinth of your own consciousness or embarking on a journey through some segment of this terra, you will feel a kinship.

Recorded around the world and mixed by Nicholas Vernhes at Rare Book Room (Animal Collective, Baby Dee, Dirty Projectors, et cetera) in Brooklyn, the tracks of Bachelorette are built on buzzing synth grooves, folky guitar strums, and the occasional snap of drums and percussion ? aided and abeed by a whimsical, searching sense of instrumental color. We are guided through the darkness of infinite space by Bachelorette's luminescent lead vocal. Sing along!

Bachelorette envisions herself surrounded by her computer ?musicians'; her songs ?often start simply and spiral outward like cotton candy in the making.? Bachelorette's music was originally crafted with thrift-store found instruments, resulting in her songs described variously as "cosmic folk?, "sci-folk?, "computer folk" or "tech-folk", or a ?lo-fi, one-woman version of Animal Collective.?

Chosen as 'one of ten artists to watch in 2009', Chicago-based online rag Dusted Magazine jump-started an international buzz ? six months before the release of her worldwide-debut. (www.dustedmagazine.com/features/801). Her fans include Animal Collective, Beach House, and Bonnie ?Prince' Billy, with whom she has extensively toured.

2007 saw the follow-up to TEOT with Isolation Loops, the product of Alpers' sequestered writing and recording process, tucked away in her grandfather's rustic cabin in the shadows of New Zealand's Canterbury Alps.

Mojo called 2009's My Electric Family ?a real treasure?; Pitchfork comments ?when Alpers folds herself into the electronic process, the results are delicious, even ecstatic,? and LA Weekly states that Bachelorette's music is ?as bright and transcendent as it is detailed and personal.?

During the week of May 16th, 2011, Bachelorette' third full-length album, self-titled 'Bachelorette'. was internationally released.