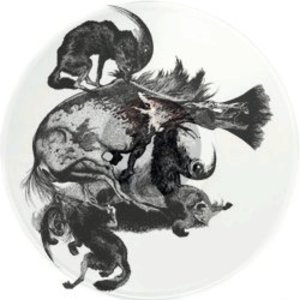 Jenks Miller's psychedelic metal / drone project, Horseback, produced an avant-garde sleeper-hit with 2007's Impale Golden Horn. That record, which Aquarius Records described as ?the best drone record of the year? upon its release, boasted four lengthy tracks, each one a vibrant and kaleidoscopic journey toward a manic, inevitable nirvana. More melodic and accessible than most noise records and noisier than most dream-pop records...

Horseback toured in the fall of 2007, including a stop at the fourth-annual Arthur Magazine-curated Million Tongues Festival in Chicago.

Horseback's next full-length, The Invisible Mountain, was released by Milwaukee's Utech Records (Locrian, Aluk Todolo, Mamiffer) in 2009 to underground acclaim; it was then released on vinyl by the United Kingdom occult label Aurora Borealis in 2010 before being picked up by heavy-music powerhouse Relapse Records, who distributed the record around the world. Carried forward once again by Relapse's greater visibility, The Invisible Mountain scored spots on many year-end lists (including Stereogum, Decibel, BrooklynVegan, Verbicide, All Music Guide, and OMG Vinyl).

After the success of The Invisible Mountain, Horseback produced a number of splits with genre-defying shape-shifters like Voltigeurs, Locrian, and Pyramids, and Forbidden Planet a limited black-noise cassette full-length on Brave Mysteries. Horseback's full-band lineup made selected live appearances in 2011, including a performance at the Bull City Metal Fest in Durham, NC, and a BrooklynVegan-curated show in NYC at The Studio at Webster Hall with Hull, Caltrop, and Batillus.

In early 2011, Relapse re-released 2007's Impale Golden Horn and 2010's Forbidden Planet together as The Gorgon Tongue, with new artwork from frequent Horseback collaborator Denis Forkas Kostromitin. Currently, Horseback is finishing their next full-length record, titled Half Blood, for Relapse.