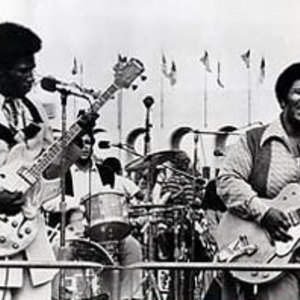 Rance Allen was born in Monroe, Michigan in 1948. His parents, Thomas and Emma Pearl Allen had eleven siblings (six sisters and five brothers). Rance preached his first sermon and started his singing aspirations at the age of five. By the time he was seven, he was playing the piano and at nine years of age he was preaching and singing the gospel throughout Michigan, Ohio and Pennsylvania.

The Rance Allen Group were the perfect fusion of Gospel and Soul, first recording in 1969 for the local Reflect label in their home-town of Monroe. Rance was married the following year.

In 1971 they were discovered by the McElmore Avenue, Memphis-based Stax Records, who recorded the group for their Gospel Truth (later the Truth imprint) subsidiary. The Rance Allen Group's first releases were in the gospel genre, notably 'Just My Salvation' (a spiritual version of the Temptations, 'Just My Imagination').

The group then performed at the Wattstax concert at the Los Angeles Coliseum on the 20th of August 1972, performing 'Lying on the Truth' at the show as part of the Gospel section of the show.
The Rance Allen Group's first chart record, 'I Got To Be Myself' reached number 31 R & B, in 1973, and brought the group to the attention of more secular audiences.

The group then relocated to the Capitol Records imprint, however, the label produced only one single which made the charts, the anthemic, 'Truth Is Marching On' (number 100 R & B) in 1977.
An album 'Say My Friend' saw a release on the label, an album produced by the ex-Corporation songwriting team, the Mizell Brothers. Fantasy Records were the latest custodians of the Stax Records imrpint, and commenced re-releasing the back catalogue of Stax in 1976. Dr. Rance Allen was ordained an Elder in the Church of God In Christ, by the late Bishop John Seth Bailey in 1978.

The Rance Allen Group were then re-signed to Stax the same year, having huge success with 'I Belong To You' (number 24 R & B) and 'Smile' (number 41 R & B), both in 1979. In 1980, the Rance Allen Group recorded 'I Feel Like Going On', which paired the group up with ex-Motown Records artist, Ronnie McNeir.

After recording their third album for Stax in 1980, the group joined the Gospel label, 'Word', and recorded for several years on Word's subsidiary label, Myrrh. Following other pursuits, Dr. Allen took to acting whilst traveling in several gospel music stage productions between 1989-1992. The Rance Allen Group have performed in almost every major city in the United States and presently have over twenty albums in their resume. They also have three Grammy nominations, four Stellar Award nominations and a Soul Train Music Award nomination. In November 1998, The Rance Allen Group was inducted into the International Gospel Music Hall of Fame and Museum.