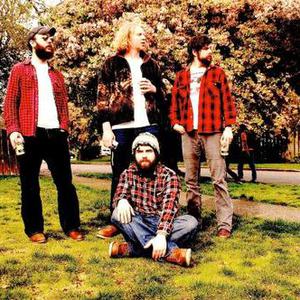 There is a popular chapter of American mythology that pertains to The Highway. It tells of a two-way ribbon of blacktop running endlessly through our past to our future, linking city to country, offering escape and motion and freedom to travel anywhere the imagination might wander. In this chapter, The Highway is both means and end, metaphor and reality. And down that mythical Highway there is a Bar. Inside that Bar is a Stage. On that Stage is a Band. That Band is the Moondoggies.

And down that mythical Highway there is a Bar. Inside that Bar is a Stage. On that Stage is a Band. That Band is the Moondoggies.

The Moondoggies are a four-piece band from Seattle that plays timeless American music. Warm three-part harmonies, gothic Rhodes organ, and wanderlust guitar mark a sound rooted in boogie blues and cosmic country; whip-smart songwriting leads to hook-heavy tunes that bristle with originality. Led by 22-year-old singer/guitarist Kevin Murphy, the Moondoggies are intent on artistic balance. They're a serious band with a silly name. They play music that speaks of travel but is strongly connected to its place of origin. They're young musicians continuing a legacy that goes back generations. Songs that unravel over seven sinuous minutes are somehow catchy and compact.

Murphy and his band mates?Robert Terreberry on bass, Carl Dahlen on drums, and Caleb Quick on keys?started making music together as teenagers (all but Quick graduated from Cascade High in Everett, a Seattle suburb). The Familiars, their first band, was a noisy, garage-rocking outfit that gained minor notoriety locally, but the boys soon realized their passion lied in vocal harmonies, not power chords. Seeking the inspiration of new surroundings, Murphy lit out for Ketchikan, Alaska in the summer of 2005. It was there, in a dusty attic with an acoustic guitar and four-track recorder, that he zeroed in on the Moondoggies' sound. Upon his return to Seattle, the band took up residence at the Blue Moon Tavern, a notorious University District dive that for over 70 years has boozed up a rogue's gallery of writers, poets, artists, student radicals, and other drunks. The Moondoggies and the Blue Moon were made for each other. Before long they accrued a dedicated following drawn to the band's woozy, spirited live shows and a new Northwest phenomenon was born.

That same spirit shows up on Don't Be A Stranger, the Moondoggies' debut. Shades of gospel, blues, rock, and country commingle; wall-of-sound harmonies radiate joy and passion; songs remain in the mind long after the record ends. The influence of the Band, the Byrds, and especially early Grateful Dead is evident, though the Moondoggies' lyrical economy and compositional sensibility render these 13 tracks fresh and unique. From the hard-charging garage boogie of "'ol Blackbird" to the mournful, hand-clapped spiritual "Jesus on the Mainline" to the anthemic rock 'n' soul of "Changing" to the rollicking, bar-room singalong "Bogachiel Rain Blues," each of these songs earns a slot in the great American jukebox.

"I don't think sitting down and playing guitar is an old-time thing," Murphy recently told The Seattle Times. "Our sound is what seems to happen when we sit around and sing and play. It's never going to get old. People will always do that."

There will always be a Band that sings the song of The Highway. For us, for now, that band is the Moondoggies.

Don't Be A Stranger