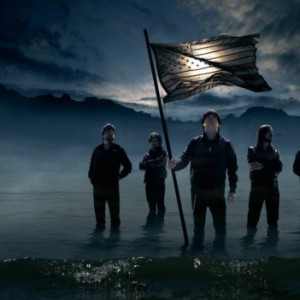 Sometimes the most compelling art can come from life's greatest struggles, which in the case of Tooth & Nail newcomers I Am Empire, only added fuel to the group's already blazing alternative rock fire. Though the San Jose-bred fivesome had no trouble igniting the local scene since forming in 2008, including dates alongside Flyleaf, Sublime, Deftones, Silversun Pickups, Thursday, Four Year Strong and The Wedding, a pair of charting singles (?You're A Fake? and ?The Elevator?), plus additional acclaim from Alternative Press, AOL's Spinner.

?The whole record is about abandonment, particularly the fact that my father is the one who abandoned me,? says the scorching singer/songwriter for I Am Empire (whose moniker is basically a battle cry to be yourself and never feel pressured towards conformity). ?We decided to name the record Kings because it signifies the head of a household, and if you've been abandoned, you want to look past that person and try to be better when you grow up. The goal is to take up the crown that person left behind and be better than the person who left, which can really apply to any type of relationship.?

Yet the plot thickens in the case of Lyons, whose biological dad may have left when he was ten, though a stepfather entered the picture a little later down the line. In time, this new father figure of sorts became incredibly close to the family, so much so that Austin adapted his last name and considered him to fill the original role his birth dad missed, though that relationship also took an unexpected turn.

?Basically he decided to leave and said he wanted kids of his own, which absolutely destroyed me, my mom and my sister,? he reveals. ?From that point on, I decided to write this record reflecting on what happened when both my biological dad and a person I called my dad left me. I try to be as honest as I can be because that really helps dive deep into myself. It's been a big therapy session for me, and even though I opened myself up to a lot of painful things I didn't want to put out there, it's been good for my writing. Everything works out for the better, and even though these situations were awful, I want there to be a positive outcome.?

The results find the guitar-charged record split between tracks of justified venting to seasons of spiritual renewal, both of which find the band unfurling its emotions as if their lives depended on such gripping delivery. Cuts like the lead single ?Brain Damage,? ?Saints & Sinners,? ?Heart Attack,? ?To the Moon? and ?Foxhole? are aggressive examples of anger relief that encourage listeners to never bottle up their emotions, while ?Hammers & Anvils,? ?Love & Despair? and ?Take Me Away? speak of healing, reconciliation and forgiveness.

?Even if you've been abandoned, you need to dig past the depression and ask God to help you find the joy in your circumstances,? suggests Lyons. ?God's continually worked through my situation and I have a positive outlook, to the point where we can close up the record with ?It's Not Fair' with lines like ?you wished me away/ but I wish you well.'?

The music is just as varied as the lyrical longing, ranging from muses like Jimmy Eat World to Muse, My Chemical Romance and Anberlin (who the group co-writes with on a track). In fact, the dozen track disc also benefits from the multi-faceted approach of producer Rob Hawkins, who's also known for his work with Disciple and Fireflight (to name a few).

?We tried to have a dirtier sound in general,? admits Lyons. ?A lot of the songs are really heavy, a couple fall in the pop/rock vein and we even have a kind of folksy acoustic song. We have a wide range of sounds and made sure not to stick with the same type of song over and over again. We also made a point for there not to be any throwaway tracks on the album or to waste any time recording a song that wasn't worthwhile.?

Between those artistic ambitions, members' unceasing work ethic, tireless time on tour and thematic reliability, I Am Empire is a perfect match with Tooth & Nail, which is a literally a label dream come true for the guys who grew up listening to its influential roster. ?We talked to them for about a year, and in the end, it just felt like family,? sums up Lyons. ?They're the kind of label we always dreamed to be on, especially in high school when we used to say ?man, it would be so cool to be on Tooth & Nail someday.' We've literally grown up with them and our sound works within its line-up. Everything's going great and it's going to be an awesome relationship.?