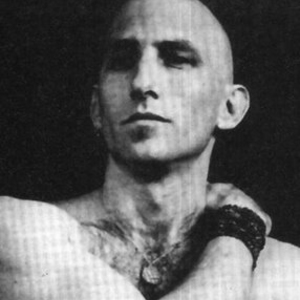 Z'EV (born Stefan Joel Weisser on February 8, 1951 in Los Angeles, California) is an American poet, percussionist, and sound artist. After studying various world music traditions at CalArts, he began creating his own percussion sounds out of industrial materials for a variety of record labels. He is regarded as a pioneer of industrial music. In 1983, critic Roy Sablosky wrote: ?Z'EV doesn't just break the rules, he changes them. Journalist Louis Morra wrote in 1983: ?Z'EV is a consummate example of contemporary performance art, as well as modern composition and theater.

?? and, ?Z'EV realizes many of modernist art's ultimate goals: primitivism, improvisation, multi-media/conjunction of art forms, the artist as direct creator.
His work with text and sound has been influenced by Kabbalah, as well as African, Afro-Caribbean and Indonesian music and culture. He has studied Ewe (Ghana) music, Balinese gamelan, and Indian tala.
From 1959-65 he studied drumming with Arnie Frank, then Chuck Flores and then Art Anton at Drum City in Van Nuys CA.

In 1963 he abandoned Judaism and began his life-long relationship with World religions and esoteric systems.

1964 saw the beginning of his initial attempts at writing Poetry and explorations of both Two and Three dimensional Artforms. Note that some of the Smoke Paintings produced during this period still exist. These were created by manipulating pieces of paper over arrangements of candles to catch the carbon trails.

1967-9 was a period of major import in his Artistic development, for this was when he really learned to 'Listen' and improvise. Together with his long time friend Carl Stone and James Stewart they formed the Hog Fat Blues Band which eventually evolved into the Silent Arts Group.

Note that this name was an homage to both the Sonic Arts Group (the original name of the Sonic Arts Union; Robert Ashley, David Behrman, Alvin Lucier and Gordon Mumma) and the first published book of John Cage's writings, entitled Silence (1961).

The S.A.G. was a trio with Carl on Farfisa 'Professional' organ, Vox echo unit and wah-wah pedal and an Ampeg scrambler pedal (upper-harmonic distortion and overdrive) , James on Fender Bass and 'Stefan' on traditional Drum set, performing proto-Jazz Rock. Auditioning for Frank Zappa's Bizarre Records led to them being given time at Bizarre's rehearsal studios on La Brea Blvd. However nothing came from this due to their inability to develop a 'show'. The band ceased activities and both he and Carl went on to attend CalArts.

After studying at CalArts from 1969-70 with poets Emmett Williams and Michael S. Bell and writer/critic Sue-Ellen Case, he began producing works using the name S. Weisser, primarily concentrating on visual and sound poetries.

In 1975, he was included in the "Second Generation" show at the Museum of Conceptual Art in San Francisco. For this show he presented the work, 'Book Of Love Being Written As They Touched', performed by 8 female voices. The text was drawn from the 40,320 permutations of the 8 word phrase. Each woman read from a selection of sentences beginning with one of the words. 10 copies of the text were produced by the Computer Science Department at Los Angeles Pierce College in Woodland Hills CA. Copies of the total Text are in the private collections of Emmett Williams and Claes Oldenburg.

In 1976 he moved from Los Angeles to the Bay Area, ending up with a storefront studio on MacArthur Boulevard in Oakland, pretty much midway between the headquarters of the Black Panther Party, (who dissolved that year), and the Hells Angels (still extant). A primary reason for this move was his association with the San Francisco Alternative exhibition space La Mamelle (run by Carl Loeffler and Nancy Evans).

In 1977 he presented his first solo percussion performance at La Mamelle under the project title 'Sound of Wind and Limb'.

In 1978 he began developing an idiosyncratic performance technique utilizing self-developed instruments formed from industrial materials such as stainless steel, titanium, and PVC plastics. Initially these instruments were assemblages of these materials, used with a movement-based performance style that was a form of marionette, although with the performer visible. He has since come to refer to this performance mode as 'wild-style', a term originally related to graffiti. Critic John Buckley described his performances in this era:
The instruments are collections of objects ... strung together with ropes and swung at varying speeds and directions to produce a fairly astonishing range of pitches and timbres. And the moves the guy goes through to manipulate these instruments are, for grace and athleticism, strong stuff. Z'EV is also interesting for the close correlation of visual and musical aspects, since the physical vibrations of the objects you see are the same as those picked up by the ears as sound. Also, since the rhythms of the work are dictated by the performer's every and any movement, an inevitable integrity unifies the act.

At this time he first began to perform outside of the Fine Art context initially at the Mabuhay Gardens in San Francisco. The support he received from Dirk Dirksen was crucial to his development. In the fall of 1978 he began performing under the name Z'EV, which comes from the Jewish name his parents gave him at birth (Sh'aul Z'ev bn Yakov bn Moshe bn Sha'ul).

In November and December 1980, Z'EV opened a series of UK and European concerts in the first headlining tour of the British group Bauhaus.

On that tour and his first solo tour of Europe immediately afterwards, Z'EV introduced intense metal based percussion musics to the UK and Europe. Critic Jason Pettigrew (current editor-in-chief of Alternative Press Magazine) attests to Z'EV's pioneering use of metal found object as percussion, writing: "Consider your music collection. Neubauten? Test Department? Z'EV's been there first.'.

While but one of the progenitors of the "industrial movement", he was also fairly responsible, along with Neil Megson, for delivering the ?tribal' impulse and esthetic into the Western/European cultural milieu developing between the years 1978-1984.

In 1981, 'Shake Rattle & Roll', a VHS video documenting his first wild-style performance on the East coast (produced by video artist John Childs), was released by Fetish Records in the UK and was the first ?music' / art video to be commercially released.

Since 1984, he has been concentrating on performing in a more traditional mallet-percussion style, albeit with highly idiosyncratic and "extended" mallet percussion techniques and his self-made or adapted instruments.

Both performance modes, (wild-style and mallet percussion), have been described as cacophonous when considered in traditional Western musical terms, because of the dense elemental acoustic phenomena Z'EV's instruments produce. In point of fact, Z'EV doesn't actually consider the results as "music" per se, but more as orchestrations of highly rhythmic acoustic phenomena.

From 1986-90 he was a Guest Teacher in Composition and Improvisation at the Theater School for New Dance Development in Amsterdam, the Netherlands. Together with dancer Ria Higler he mentored a year group through their entire four year course of study. The German dancer Thomas Lehman (www.thomaslehmen.de) is perhaps the most currently active of his students, and they are still friends.

In 1990 he began working with Amsterdam House Musician, DJ Dano. Their work, also in conjunction with Austrian media artist Konrad Becker, was instrumental in the emergence of the genres known as Gabber and Hard Core.

His recordings have been released by labels such as C.I.P., Cold Spring, Die Stadt, Soleilmoon, Tzadik Records, Subterranean and Touch.