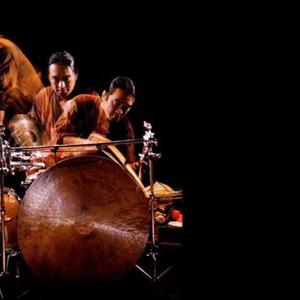 Tatsuya Nakatani is originally from Osaka, Japan. In 2006 he performed in 80 cities in 7 countries and collaborated with over 163 artists worldwide including Eugene Chadbourne, Michel Doneda, G.E. Stinson, Audrey Chen, Blue Sabbath Black Fiji, Peter Kowald, Travis Johnson, Vic Rawlings, Mary Halvorson and Greg Kelley. In the past 10 years he has released nearly 50 recordings on CD. He has created his own instrumentation, effectively inventing many instruments and extended techniques.

He has created his own instrumentation, effectively inventing many instruments and extended techniques. He utilizes drumset, bowed gongs, cymbals, singing bowls, metal objects, bells, and various sticks and bows to create an intense, organic music that defies category or genre. His music is based in improvised/ experimental music, jazz, free jazz, rock, and noise, yet retains the sense of space and beauty found in traditional Japanese folk music.

In addition to live solo and ensemble performances he works as a sound designer for film and television. He also teaches Masterclasses and Workshops at the University level. He also heads H&H Production, an independent record label and recording studio based in Easton, Pennsylvania. He was selected as a performing artist for the Pennsylvania Performing Artist on Tour (PennPat) roster as well as a Bronx Arts Council Individual Artist grant.