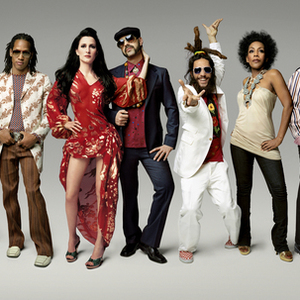 Yerba Buena's new concept album Island Life is an ambitious urban-tropical synthesis that won't let you stop dancing. "I always want the Yerba Buena sound to be evolving," said Levin, taking a break from the mixing board at his "Fun Machine" studio. "Yerba Buena will always be about Afro-Cuban roots, but this record also has gypsy and cumbia influences. I think the confluence of different immigrant music in New York is a great avenue for pop culture to explore."

Since Yerba Buena has always channeled the spirit of tropical island rhythms with the energy of New York, it's fitting that the new album is titled Island Life. "I always thought it was funny when I would hear people in New York say that they need to get away to an island because they were forgetting that they were already living on one," explains Levin. "With Manhattan's growing Spanglish soul, the island music is right here on our own streets whether it's merengue, reggaeton or even steel drums.