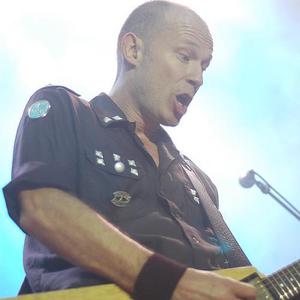 Wolf Hoffmann (born December 10, 1959 in Mainz, Germany) grew up in Wuppertal. He is primarily known as guitarist in the German heavy metal band Accept from 1976. In 1997, he released the album Classical with rock versions of classical pieces. He contributed to Skid Row vocalist Sebastian Bach's solo album Bring 'Em Bach Alive! and to a 2000 Japanese tribute to Randy Rhoads album called Randy Rhoads Tribute with Sebastian Bach on "I Don't Know" and with Joe Lynn Turner on "Diary of a Madman". Hoffmann has made contributions to Peace Breaker by Skew Siskin and Back in the Ring by Vengeance.

He has also loved photography as a hobby, and eventually made it a career. He took the cover photo for Objection Overruled. Since the Accept's official retirement in 1996, Wolf has worked as a professional photographer (website listed below). He is based in Nashville, TN, and also still maintains a residence in Berlin, Germany.

Wolf Hoffmann is married to Gaby Hoffmann (n?e Hauke), who used to be Accept's manager. Gaby Hauke contributed to Accept's songwriting under the pseudonym Deaffy.