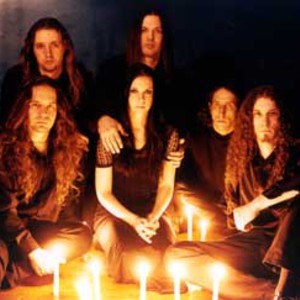 Without Face is a Hungarian Progressive Gothic Metal band that formed in 1997. We recorded our first EP early 1998 called "Men Without Face" which was followed by our first video "Foolish Life".At this time we mainly played at Eastern European Festivals. At the end of 1999 the band recorded the first album entitled "Deep Inside".We had our first offer from the American Dark Symphonies label and the album was released in 2000.We played with many bands such as Kovenant, The Gathering, Amorphis, and Anathema etc.We folowed this with our first European club tour and the second video "I and I".

In 2001 we signed a contract with the Earache label,releasing our second album entitled "Astronomicon" in June 2002."Astronomicon" went on to be the "Independent Album of the Month" in the Metalhammer UK magazine.(Also scoring 10/10 in Metalhammer Hungary,8/10 in Hardrock Magazine France.6/7 in Metalhammer Germany and 8/10 Rock Hard Spain)Other positive reviews were also received worldwide.

Without Face have gone through several line-up changes. Anett Bal?ssi (vocals), P?ter "Incho" Inotai (guitars), Kyrah N?meth (keyboards), and Bertalan Temesi (bass guitar), were all original members who left in 2000 and 2001. Juliette Kiss, who replaced Anett on vocals, has since left to form UK band To-Mera . Andras Szabo, one of the original vocalists, departed the band in 2006, and has since joined ex-Sutcliffe guitarist Tommy's new project Lunatic Asylum, with ex-To-Mera drummer Akos.