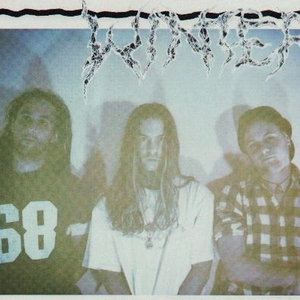 Winter was a New York/Long Island, USA based metal outfit formed in 1988 that only existed until 1991. Line up was: Stephen Flam - guitars, John Alman - vocals/bass and Joe Goncalves on drums.Together with other legends like Thergothon and Disembowelment they formed a groundbreaking foundation for death-doom metal and for its more extreme form called funeral doom.This mighty US trio has been an inspiration for hundreds of extreme metal bands bands and the most notable of them are Darkthrone,Sunn O))), Evoken, Hooded Menace,Rigor Sardonicous and Moss.

The band released only a demo tape in 1989 and recorded an album entitled "Into Darkness" in 1990 that was released on tape and CD by a very small label Future Shock Recordings (FSC8000 / FSCD8000). Unfortunately that label went bankrupt. Shortly after that stroke of fate the band disbanded.
Two years later the German label Nuclear Blast re-released "Into Darkness" (1992; CD/LP/MC NB064) and the demo tape "Eternal Frost" (1994; MCD056).
In 1999 and 2008 both albums were re-released once more as "Into Darkness/Eternal Frost".

Winter had an aspiration to be the slowest band in the world.

Endless Space (Between You & I)

Brown Is The Colour

Across The Circle's Edge