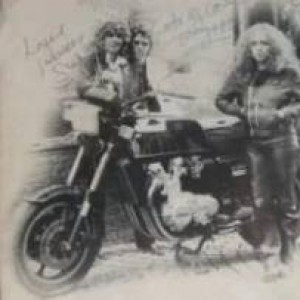 Wicked Lady exemplifies the "record collector" bands that gain new life through reissues: in this case, Kissing Spell's albums The Axeman Cometh and Psychotic Overkill. Their appearance marked some belated recognition for the power trio, which Northampton singer-guitarist Martin Weaver formed in 1968 with drummer "Mad" Dick Smith and bassist Bob Jeffries. However, Wicked Lady never came within a whisper of the stratospheric status attained by Cream, or the Jimi Hendrix Experience.

The band's liberal use of feedback -- and large biker following -- kept them relegated to clubs, even during the twilight hours of the psychedelic era.


Awash in drink and drugs, Wicked Lady split up in 1970, but Smith and Weaver soon regrouped with new bassist, Del "German Head" Morley. The new lineup duly set about documenting its existence, as captured on Psychotic Overkill -- whose feel is looser than Axeman Cometh. The effect is a shotgun marriage of Black Sabbath-style rifferama, supported by a less risk-taking rhythm section. Weaver's vocal style lacks charisma, but his wah-wah and fuzz-driven guitar style carries the day. The highlights include a bluesy cover of Hendrix's "Voodoo Child," the sex 'n' drugs snapshot of "Sin City," and the howling, 21-minute epic, "Ship Of Ghosts."

But Wicked Lady's erratic ways proved too difficult for clubowners, who eventually refused to let them play. (At one gig, the band reportedly played the same song over and over until an irritated management pulled the plug on them.) Wicked Lady imploded in 1972, but Weaver rebounded that same year by joining the Dark, a more psychedelic- and progressive-outfit. Their Round The Edges album became a Holy Grail for collectors -- because only a handful of copies were made for band members and their associates. (Kissing Spell reissued the album in 1991.) Weaver next teamed with classically-trained keyboardist Dave "Doc" Wadley -- who'd worked with a pre-Sabbath Tony Iommi -- in the Mind Doctors.

Kissing Spell also reissued On The Threshold Of Reality, an album of laidback instrumental "head" music.Weaver most recently surfaced on the re-formed Dark's Anonymous Days (1996), which featured material written in the 1970s and 1990s.