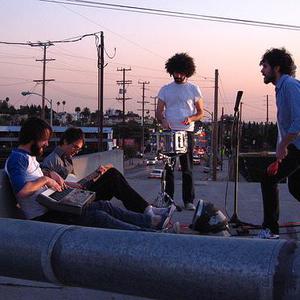 Not to be confused or associated with Why? (the american band), WHY (the Canadian band) first took shape years earlier in 1995 in Winnipeg Manitoba, when Brian Cook (vocalist) chose to see his musical ideas take form. Quickly rounding up some of the best players the local scene had to offer, they recorded their first album THE NAKED SOUL in 1994, and followed it with 2002's THE RISE AND FALL OF THE QUESTION MARK, which drew fans and critics alike to their energy-fueled live shows.

As years passed and other commitments took hold, Brian continued to write and began to dedicate time to Make Poverty History. First introduced to the idea by heroes Bono (U2) and Bob Geldof (LIVE AID, LIVE 8, Boomtown Rats), Cook felt the need to use his music to raise awareness to the staggering true fact that a child dies due to extreme poverty every 3 seconds.
Copies of the LAZARUS EFFECT album, the title song having already received air play in major markets across Canada, were also given out before U2 concerts in Ottawa and Montreal and were made available at Make Poverty History and on-line at CDBABY.COM. A portion of the proceeds from the album went directly to the charity and the album's artwork featured heartbreaking photographs all supplied by Make Poverty History. The album itself featured newly remixed and/or re-recorded tracks, the new single, as well as a video recorded for the track, ?Keep My Peace?. The album also offers links to the Make Poverty History websites as well as an interview Cook did with Shaw TV.

With their album RED coming, lineup and songwriting in hand, WHY continued to raise awareness for both themselves as well as Make Poverty History. The single (and title track) ?RED? sat a #1 on the KICK FM Winnipeg Top 40 for 4 weeks in a row, and was named ?Song of the Year?. Now the B-side on the ?RED? single, ?The Surface?, hit #1 on KICK FM and #5 on THE Q FM in Victoria, BC.

WHY have released ?WE STARTED OUT (Somebody's Baby)? and ?MORE OR LESS? as part of Ray Zahab's (RUNNING THE SAHARA) next film.

WHY are currently writing and recording their next full length album. They released the song ?PRISONER of HOPE?, supporting UNICEF's work in Haiti, and recently released the hit single ?DO IT SCARED?, which has spent considerable time on the KICK FM charts and has also managed to garner significant buzz worldwide.