What Made Milwaukee Famous 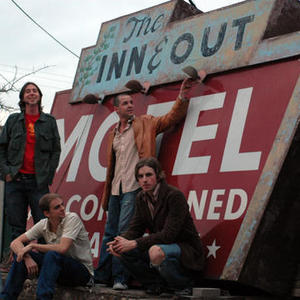 What Made Milwaukee Famous is an indie pop-rock band based in Austin, Texas. The band met in 2002 through an ad placed in the alternative Austin paper The Austin Chronicle. Band members spent their entire first year getting to know one another before presenting themselves to the public. Their first album Trying to Never Catch Up was released in 2005 and was very well received. Singer Michael Kingcaid attributes much of his singing style to Jeff Buckley, and the rest of the band members boast a wide array of musical influences.

Singer Michael Kingcaid attributes much of his singing style to Jeff Buckley, and the rest of the band members boast a wide array of musical influences. Drew Patrizi on keyboards, John Farmer on bass, and Josh Vernier on percussion completed the band's original lineup, but in late 2005 Vernier was replaced by Jeremy Bruch. Bruch is also a member of Hurts to Purr, another Austin band.

In September of 2005, WMMF became the first unsigned band to be featured on the PBS series Austin City Limits in years, which they recorded with Scottish indie rockers Franz Ferdinand. In early 2006, WMMF was finally signed to Barsuk records.

Jerry Lee Lewis' song What Made Milwaukee Famous is the band's namesake.

The bands second album What Doesn't Kill Us Makes Us Stronger was released in 2008.

You Can't Fall Off The Floor

What Doesn't Kill Us

Trying to Never Catch Up