Arsonists Get All The Girls 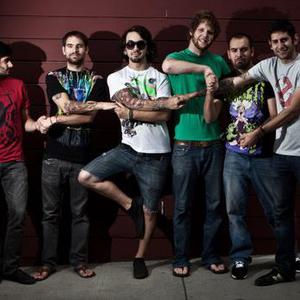 Arsonists Get All The Girls was originally fronted by vocalist Alex, with Arthur on guitar, Pat on bass, Garin on drums and Arthur's cousin Jeff on Keys. Soon rumors began floating about a new vocalist joining up with AGATG which turned out to be Remi. AGATG saw 2 members (Alex and Jeff) leave the band, but would soon see 2 new members join the band, Cameron (Treachery's Wake, vocals) and Nick (guitar). This is the current lineup for 2007. The band recently headed to the studios to record with Zach Ohren (Animosity, Taste of Blood, Entragian, MORIA, etc) at Castle Ultimate, in Oakland CA. To Record 'The Game Of Life.' As Off April 24th 2007 AGATG Signed Up To Century Media And A Press Release Was Posted On Blabbermouth.net

'Century Media Records has announced the signing of ARSONISTS GET ALL THE GIRLS. This Santa Cruz, CA six-piece released its debut offering, "Hits From The Bow", on Process Records in 2006. They went on to tour the U.S. and shared the stage with bands such as THROUGH THE EYES OF THE DEAD, THE NUMBER 12 LOOKS LIKE YOU, ED GEIN and HEAVY HEAVY LOW LOW. The group describes itself as "the derailment of a gay train on its way to straight town."

"Century Media was the most unexpected swing that life's baseball bat took to our nuts... feels good though," comments bassist Pat.'

Their bassist Pat Mason, sadly, has passed away.

The band left the following blog on their myspace on Saturday, December 01, 2007, letting fans know about their loss.

"We can't describe the pain and sorrow that we all are feeling right now. Last night/early this morning our bassist, Pat Mason, passed away. Pat was an amazing person and brother to all of us. It was his 21st birthday and we all got to see him at band practice. He then proceeded to go out to the bars. He went to sleep at a friend's house. We don't know the full details but when friends tried to wake him up this morning he didn't wake up. We could never trade him for the world and could never replace him. We will always love him and will always be in our hearts. We are going to continue with the band cause that is what Pat would have wanted. There will be a donation account set up soon for his family and possibly a local benefit show as well. Thanks for everyone for the support that the band has since the beginning. We love you all and Pat loves you all as well."

The Game Of Life

Hits From The Bow