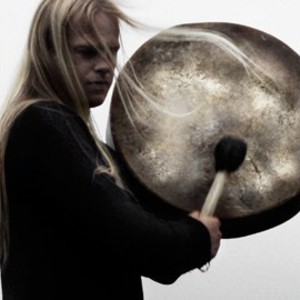 Wardruna is a Norwegian musical constellation set out to explore and evoke the depths of Norse wisdom and spirituality. Musically Wardruna has its main focus on the cultic musical language found in the near-forgotten arts of galder, seidr and the daily acts of the cultic life, mixed with impulses from Norwegian/Nordic folk music and music from other slavic and celtic cultures. The album entitled ?Gap var Ginnunga' is the first in a planned trilogy that will interpret the runes of the elder futhark.

The album entitled ?Gap var Ginnunga' is the first in a planned trilogy that will interpret the runes of the elder futhark. Each album will feature eight runes, but not in accordance with the order of the three aettirs (families), which is most commonly used. Recordings partly take place outdoors at locations relevant to the different runes. The utilized instruments are mainly old and historical instruments such as deer-hide frame drums and ceremonial drums, mouth harp (Jew's harp), clove/hoof rattles from deer and goat, bone flute, goat and cow horns, Hardanger fiddle and bowed lyre, also more unconventional inputs like trees, stones, water, fire etc. are employed to enhance the nature of the rune being ?portrayed'.

More information can be found on the official website, www.wardruna.com.