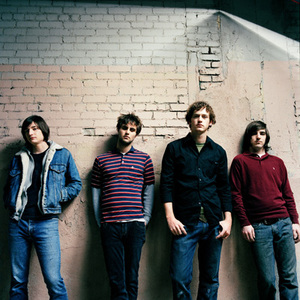 Waking Ashland was formed in November 2003 by singer/keyboardist Jonathan Jones, guitarist Ryan Lallier and drummer Thomas Lee, all of which were at that time music majors at California State University, Northridge. Robert Teegarden ? a friend of the band ? temporarily helped out to fill the vacant position on the bass guitar. Their band name stems from the aspect of connecting people through music, paired with a reference to the town of Ashland, Oregon.

In early 2004, they self-recorded and released their debut EP I Am for You. Simultaneously, the line-up was completed by guitarist Nick Rucker and bassist Derek Vaughn, replacing Teegarden. However, the two soon left the band, and a permanent bassist was found in Andrew Grosse, frontman Jones' former bandmate in their Christian accented high school band Formula316.[2] Without record label distribution and solely through word of mouth promotion, the CD's first pressing of 1,000 copies (being only available through the band's website and at their concerts) sold out within a month.[3] To date, the six-song CD managed to sell over 10,000 copies.[4] Its success landed the band a booking agent and allowed them to drop out of college, to pursue a career in the music industry. As the result of their constant touring and ? due to lucky circumstances ? their participating in 2004's Warped Tour, word spread fast and garnered the attention of several record labels, including Tooth & Nail Records, home to such bands as Further Seems Forever, Mae and Underoath. Tooth & Nail signed Waking Ashland and released their first full-length album Composure ? produced by Lou Giordano ? in May 2005. The album scanned 2,400 units within its first week of sales, debuting at #19 on Nielsen SoundScan's Alternative New Artist chart and at #53 on their Top New Artist Album chart.[5]

On September 5, 2005, a statement on the band's website announced that Grosse and Lee had left the band due to in-band conflicts. Temporary touring members included drummers Joe Greenetz from Sherwood and Rob Lynch from Harris, as well as bassists Jon Sullivan from Jack's Mannequin and Trevor Sellers from Number One Gun. On February 8, 2006, Waking Ashland released a nine-song EP, titled Telescopes, only in Japan. Immortal Records released Telescopes in the United States on June 13, 2006. The Japanese release had two bonus tracks, which were acoustic versions of "October Skies" and "I Am For You" from Composure. While the release featured session musicians to back up Jones and Lallier, a permanent rhythm section was finally announced in a blog on the band's MySpace profile as Nate Harold and Tim Very.

Part of the band's success can be attributed to their pages on MySpace and PureVolume. As of September 2006, Waking Ashland's songs have been played over 1.3 million times on MySpace and over 1.2 million times on PureVolume. Their song "I Am for You" appeared on the first MySpace Records compilation and the Drive Thru Records/PureVolume compilation, "Bands You Love, Have Heard of, and Should Know".

Waking Ashland's second album, The Well, was released by Immortal Records on April 17, 2007.

On July 9, 2007, Jones announced on their MySpace page that the band had broken up, citing irreconcilable differences. Jones is currently working with his newly formed band We Shot the Moon, consisting of him and two other musicians from the band Sherwood, Dan Koch and Joe Greenetz. Jones and Lallier are also currently working on solo projects.