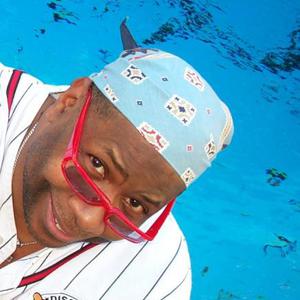 Fantastic, I Have Photographed, I Have Run Sound For, Jazz, Outside The Box, Underappreciated

Vincent D'jon Perette, known as Vinx, is musician and former athlete. Vinx attended Kansas State University on a track scholarship. In 1977, hate nearly took away Vinx's athletic career and his life when racists burned down his house, along with the home of another black family living in his Kansas City suburb. Vinx was severely burnt by the fire. He overcame his injuries and three years later made the world's second longest leap in the triple jump.

Vinx attended Kansas State University on a track scholarship. In 1977, hate nearly took away Vinx's athletic career and his life when racists burned down his house, along with the home of another black family living in his Kansas City suburb. Vinx was severely burnt by the fire. He overcame his injuries and three years later made the world's second longest leap in the triple jump. This qualified Vinx for the 1980 Moscow Olympics. When President Jimmy Carter called for an Olympic boycott that year, Vinx's athletic goals were put on hold.

A deejay in college, Vinx also performed with the Kansas State Jazz Band. In 1978, Taj Mahal invited Vinx to perform with him at the Montreux Jazz Festival in Switzerland. When Vinx's Olympic dream was deferred, he turned his back on track, but after two years returned as an assistant coach for the women's track team at the University of Texas at Austin. In Texas, Vinx rediscovered his Olympic ambitions and began working toward the 1984 Olympics in Los Angeles. After an injury at the trials took him out of the running for the '84 Olympics, Vinx stayed in Los Angeles and began working as a fitness trainer for the rich and famous. His clients included Stevie Wonder, George Hamilton and Marisa Tomei.

Vinx's early years in Los Angeles brought him much triumph and tragedy as he transitioned from his athletic past to his musical future. In 1987, Vinx landed his first recording session with Ernie Watts on his Grammy awarded Musician project. Following Tom Jones' recording of Vinx's ballad "Touch My Heart," Vinx toured extensively with the likes of Rickie Lee Jones, The Bus Boys, Teena Marie, Toni Childs and Robben Ford. His commercial agency work included appearances in both Sprite and Levi's 501 Blues ads.

Vinx left the United States for Europe with his all drum band. Vinx and the Barkin' Feet played to capacity audiences at the Montreux Jazz Festival, performing after Miles Davis and before Wayne Shorter. Back in the states, Herbie Hancock invited Vinx to perform on his Showtime Coast to Coast TV Special, where Vinx played with Bonnie Raitt, Bruce Hornsby, Lou Reed, B.B. King, Herbie Hancock, Kenny G. and Woody Harrelson.

In 1992, Vinx moved to Santa Fe, New Mexico and released his 2nd CD titled I Love My Job. The album featured Zap Mama, Patrice Rushen and Dan Kuramato. Vinx toured the world jazz festival circuit with great response and returned to the States for an appearance on the Arsenio Hall Show and The Tonight Show with old friend Branford Marsalis. Vinx's song "There I Go Again" was chosen for the highest rated episode of the hit TV series Northern Exposure. The network received so many calls about the song that it was chosen for an album release of Northern Exposure's most requested music. In 1993, Vinx released his 3rd CD, The Storyteller, which featured Stevie Wonder, George Howard, Cassandra Wilson and Omar. Vinx toured the world and recorded on Cassandra Wilson's award winning CD Blue Light Til Dawn.

In 1994, Vinx moved to Boston and started the year with the Stewart Copeland and the Rhythmatists tour. The summer brought Vinx out for a three month tour with the Spin Doctors, Cracker (band) and the Gin Blossoms, an appearance on the Bertice Berry Show, and performances and CO-MC work for all three days of Woodstock' 94. In 1994, 1995 and 1996, Vinx was invited by Miles Copeland to his 12th Century French castle for a writer's retreat. Vinx co-wrote at the castle with such notables as Brenda Russell, Cher, Michelle Shocked, Jil Sobule and Patty Smyth. 1995 brought Vinx to Africa for a five week tour of nine countries in West and Central Africa. Vinx and his drum trio were cultural attaches for the U.S. State Department. On his return, Vinx recorded on Stevie Wonder's Conversation Peace CD.

In 1996, Vinx was inducted into the Kansas State University Athletic Hall of Fame. Vinx released his 4th CD titled Lips Stretched Out. Vinx-the-painter got a rep and held his first gallery showing of his paintings. Vinx headed to Atlanta for his performance at the 1996 Olympiad.

Vinx created an innovative Euro dance project called Jungle Funk which featured ex-Living Colour rhythm section musicians Will Calhoun and Doug Wimbish. 1997 - 1999 brought Vinx and Jungle Funk to over 150 shows throughout Europe and Australia with the release of Jungle Funk's first limited edition disc; highlighting the early days of the band. Vinx returned to the U.S. for work with the Baltimore based dance guru's "The Basement Boys" and some recording on Crystal Waters' track "Mama Told Me." In 1998, Jungle Funk got signed to the German label, ESC Records (Zebra/Warner Brothers in the U.S.) with a new release, recorded live in Austria. Vinx received a grant from AT&T to work withWashington D.C.'s famed Eastern High School Choir.

In 1999, Vinx traveled to Berlin to record an album with Traumton Records titled Big ?n' Round. Vinx relocated back to Los Angeles to co-write with Brenda Russell, Stewart Copeland, and Darius Rucker. Vinx established his own StankFish Recording Studio, Midnight Archer Publishing Co. and a film production company -- Dreamsicle Arts & Entertainment. In 2000, Vinx's recording studio was robbed with a loss of over $100,000 of recording equipment and masters.

In 2003, Will Downing recorded "Don't Talk To Me Like That" ? written by Vinx and Brenda Russell ? on his Sensual Journey (Universal) release. Vinx lent his background vocals to the track, which was chosen as the single and charted on the Urban AC charts.

Vinx and Peermusic Publishing have released a standards record comprised of Hoagy Carmichael ballads and other classic songs written by songwriters on the Peer roster. Vinx has added his eclectic twist to songs like "Stardust".