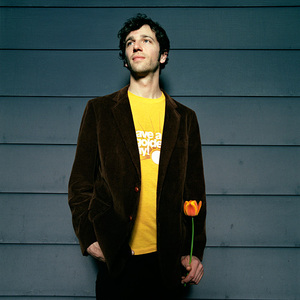 Although the Minneapolis group Vicious Vicious began as Erik Appelwick's moniker for his debut album recorded entirely on four-track, Blood and Clover, it soon grew into a full-blown live band when Darren Jackson, Alex Oana, and Martin Dosh climbed aboard. With the quartet hashing out arrangements of Appelwick's home recordings, they began making waves in Minneapolis, and the local press started to take notice, earning Appelwick a nomination for best rock recording by the Minnesota Music Academy in 2002.

The group earned another nomination by the same academy a year later... - All Music Guide, Gregory McIntosh

The Star Tribune (Minneapolis) had local music buffs, critics, writers, scenesters and taste-makers vote for the best local releases of 2005 and "Don't Look So Surprised" came in second place only after Atmosphere:

2. VICIOUS VICIOUS "DON'T LOOK SO SURPRISED"
It's a quick 34 minutes, but in that time we hear VV proprietor Erik Appelwick (also of the Hopefuls, who placed fifth in this poll last year) go from ecstatic romancer to confused lover to lost loner. One thing he doesn't lose, though, is the beat. Even at its most down, the CD is high on sexy rhythms and electronic flourishes, part Beck, Bowie and Bjrk. No surprise the critics loved it. 126 voter points

6. Vicious Vicious, "Don't Look So Surprised" (The Redemption Recording Co.) Unlike the breezy power pop of his other band, the Hopefuls, Erik Appelwick's Vicious Vicious is more concerned with hazy, lazy funk that's both danceable and sultry. Appelwick shared his golden touch with other Twin Cities acts this year, too, ably producing Tapes 'N Tapes, White Light Riot and Fitzgerald.

The Minnesota Music Academy awarded Vicious Vicious with it's "Best Local Recording of 2005" award for the album "Don't Look So Surprised".

10) Vicious Vicious, Dont Look So Surprised: Even though the band that Erik Appelwick and Darren Jackson formed together as a larktracksuit-clad power-pop combo The Hopefulswound up having a bigger buzz than their original projects, neither Vicious Vicious nor Kid Dakota fell by the wayside. In Appelwicks case, VV wound up letting him explore his funkier side, as well as stretch out over seven linked songs to tell a single story, the doomed romance between Appelwicks narrator and a free-spirited, roguish girl named Jenny. The relationship has already splintered before the first song is over, and the rest is reverie and recrimination: This is a song I wrote before that ship went down, he sings on Castaways. But bittersweet memories are still beautiful when theyre given such a gloriously glossy pop sheen.

"a feel-good, skewed pop record with the awkward eccentricity and pop smarts of Ween and early Beck." - All Music Guide

"A most enjoyable debut from a talented new-comer." - Amplifier Magazine

"a feel-good album that is bluesy, soulful, laid-back and sensual." - Lost At Sea

"an album that is filled to the brim with intelligent, thought provoking slowdance numbers" - Mundane Sounds

The Star Tribune included the new Vicious Vicious album in it's "Best Albums of the Year. . ." List: Vicious Vicious, "Don't Look So Surprised" -- Following the arc of a relationship from giddy to complicated to downtrodden, this personal seven-song electro-pop epic by Olympic Hopeful Erik Appelwick is like a melding of Beck's "Sea Change" and "Midnite Vulture" albums. It tackles the heartache without losing the groove. Chris Riemenschneider, Star Tribune (Minneapolis)

The City Pages listed "Don't Look So Surprised" as one of the top 10 local releases of 2005 in it's "year in review" issue. And I quote: "As one-fifth of local favorites the Hopefuls and the producer of the next release on this list, Erik Appelwick just may have a golden touch. His second album under the Vicious Vicious moniker is great for living-room parties, in that it's got a couple of dance-floor instigators as well as plenty of chill tracks for general atmosphere. Hell, even some of the laid-back songs are hard not to move to. Although Appelwick's got a knack for summer worship, this isn't a CD that should be shelved during our seven-month winters. Dust this sunshiny album off for holiday party season." ---Lindsey Thomas