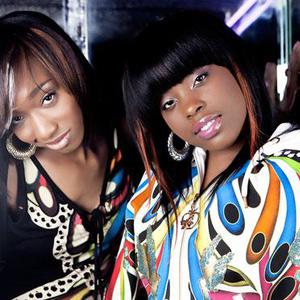 Given their name by a friend, who was taken aback after hearing their confrontational rhymes, Tee (born Teosha Thomas) and Gunna (born Jasmine Baker) joined forces as high schoolers in their native East St. Louis, IL. After some local performances, the two drove to a New York talent search, where they impressed budding music moguls Sita Lewis and Ty Fyffe (the latter a producer who had worked with the likes of Wreckx-N-Effect, Busta Rhymes, and 50 Cent). Signed to the Lewis family's Def Jam-supported Voicez label, Tee and Gunna recorded Unladylike Radio, released through Def Jam in June 2009.


Gunna and Tee first started rapping together in 2001 as sophomores in high school. Gunna had been writing rhymes and battling other rappers in her neighborhood since she was eight. Her rapid-fire flow earned her the nickname Gunna. After rapping together in their school's cafeteria, Gunna and Tee decided to try their hand in the studio. They recorded their first official song together in 2002 and after playing their music for friends, the girls decided to form a group. ?We didn't even come up with our name,? says Tee. ?We were in the studio freestyling and a friend of ours was like, ?Man, the stuff y'all saying is so UNLADYLIKE, that should be your name!?

In order to create a buzz around town, the ladies of UNLADYLIKE started playing shows at East St. Louis' hip-hop hot spot Club Casino along with any other venue that would let them be heard. ?We just started doing everything we had to do to get our name out there,? says Gunna. ?We were promoting ourselves, spending what little money we had and sometimes not even eating.?

In August of 2007, the girls decided to take the long drive from East St. Louis to New York City after seeing a commercial on BET with music manager Sita Lewis who was hosting a talent search in the Big Apple. After a 22-hour drive and several more hours spent waiting in line, the girls finally performed in front of Sita and producer Ty Fyffe at the Music Factory recording studio. All it took was the first two minutes of their song ?Sit Down? and Sita was convinced her search was over. She signed them and moved them to New York City.

With their unique style, UNLADYLIKE, received a lot of interest from the industry, but it was her family owned label VOICEZ - a joint venture with DEF JAM - that Sita felt would be the best fit for her artist. She knew that VOICEZ would allow them creative freedom and the opportunity to maximize their artistic potential. After spending time grooming them in the studio, they were ready to be showcased before VOICEZ' Chairman, legendary sports and entertainment promoter Butch Lewis, and VOICEZ Sr. VP, Brandon Lewis. They both were blown away with their style, talent and passion.

The Lewis' then brought them to L.A. Reid, DEF JAM, Chairman, to see them perform. ?We went in there, introduced ourselves and performed about five songs,? remembers Tee. ?L.A. was like, ?Do you girls have any more, are y'all tired? And we were like, ?Nah we're ready to go.' So we put on our single ?Bartender' and he went crazy?..Both Lewis and L.A. Reid, agreed they should be signed to the label immediately.

With their debut album Certified complete, Gunna and Tee are ready to win over the rest of the world. Their first single ?Bartender? is produced by their young hot in house producer 3D and shows off the ladies fun, Midwest swing. Their follow-up single, ?D'ough?, laced with Gunna and Tee's swagger, is sure to be a massive hit.

Platinum producer Ty Fyffe also tracked some hard-hitting beats for Certified where the girls celebrate their newfound success. ?Ty produces for a lot of major artists in New York like 50 Cent and Busta Rhymes so he has an East Coast sound,? says Gunna. ?We wanted to add a little Midwest flava to that so we went in the studio and laid it down and Ty loved it. A lot of people didn't expect us to get this far (being signed by major labels like VOICEZ and DEF JAM) so basically we're just talking about how we've proved that we have what it takes to make it.?

Ty Fyffe, 3D and producer Manny Perez all collaborated on ?Old You? where the girls get personal and break down their past relationships while ?Show ?Em Off? finds the ladies flaunting their designer handbags. The hot track ?Hey, What's Going On? is the girls most sobering track where Gunna and Tee dig deep to express events that have influenced their lives.

?On the track, ?Hey, What's Going On' Tee is talking about what's going on in the world as far as the recession, us having an African American president and all the things that are affecting us,? explains Gunna. ?I thought I should flip the script and let our fans know about my grandmother, who was the most important influence in my life.?

UNLADYLIKE is primed to fill the massive void that exists in the male dominated rap industry. Just like their biggest influences Missy Elliott, Shawnna and Gangsta Boo, Gunna and Tee are set to introduce an entirely hot new style.

?We've also got the right team behind us, our manager Sita Lewis who works 24/7 and VOICEZ and DEF JAM, who makes sure our music is marketed and promoted through out the world. This unique and special combination makes up the Supreme Team that we need to be a success in the industry.

?We have a different sound, period,? says Tee. Gunna also added ?there's no females out here doing it so there's an open lane for us to get into the market and do our thing. We have the capability to compete with any and everybody that's out in the industry today. And, because our sound is so unique, we will soon be STACKIN DAT D'OUGH!?